Blast from the past: originally published August 20th, 2001.

Whenever a game comes along with a new spin, you just have to check it out. Just such a title appeared: Tropico from Gathering Of Developers. You are a dictator of a small Caribbean island, and it’s your job to make it what you will. Tropico follows in the vein of “God” games, where you control the infrastructure and watch how it plays out with the inhabitants. The best of this genre has been the Impression series, of which Pharaoh was a personal favourite. How does Tropico stack up to the competition? Rather than ramble off the features, here’s the scoop direct from the developer, web site. 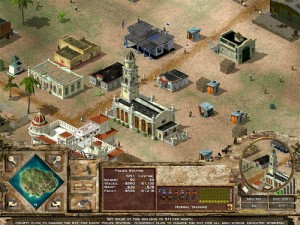 On a tiny island nation in an all but uncharted corner of the Caribbean, your destiny awaits as newly installed dictator of a small island nation. Welcome to Tropico. You must build a path of progress for a country mired in poverty, civil unrest and infighting. After all, from where else will you skim to build your personal fortune?

Tropico provides you over 85 unique structures, from hotels and spas to stimulate the tourist trade, to rum distilleries and cigar factories to keep the trade deficit in check. You’ll have to keep your quest for personal wealth under control to keep the citizens content with their daily lives. Fail to make them happy and they’ll storm your palace grounds and hang you out to dry with the tobacco leaves!

PopTop Software has created a graphically stunning building game flavoured with the spice of Latin American political intrigue. Tropico is a challenging gaming experience that will keep you coming back for more. It’s good to be a dictator!

Now let’s discuss how well it plays out, looking at graphics, sound and gameplay. 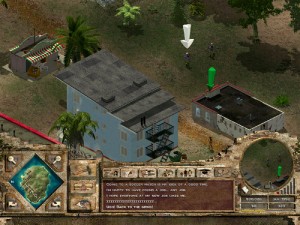 The gameplay is fairly straightforward and follows the genre to the letter. A series of pre-scripted missions can be played or you can determine the map by selecting the environment you want, such as area, difficulties, etc. You place buildings and the inhabitants do their thing; citizens must live close to a building to work there. A bit of a spin there, as buildings don’t produce “walkers” that roam the map, but citizens move from work to home to entertainment, etc. You have a friendly advisor that keeps popping up with important needs that have to be addressed. What I missed was watching building development; once a building is placed and construction completed, it doesn’t change. I enjoyed the construction aspect but would have liked to see residents decorate their houses or businesses change the exterior a bit.

Your goal in general is to bring a level of development and prosperity to your island. Beginning with a small budget, you develop commerce and trade to finance tourism, expansion and infrastructure. Each piece needs the other to grow, and it’s up to you to keep things meshed. The citizens demand types of lifestyle choices ( diversions ) like entertainment and religion; if it’s not provided you face the consequences. Your advisor lets you know when something is needed. 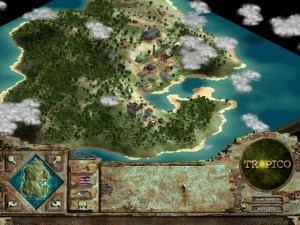 To make your mark as ruler, key “political” options are made available. You can be benevolent, brutal or somewhere in between. Parks and national holidays or citizens vanishing in the night. Ties with the U.S. or Russia produce their own bonuses and negatives, as do trade negotiations and bribes. Lots of options available to “dictate” as one sees fit.

Graphically, the game is right in line with the genre, equaling Caesar III and Pharaoh.  Detailed buildings and characters make for visual appeal; since the map can be rotated and zoomed, you get a full four-sided view of everything on the island with minute detail. The animations are smooth and suit the genre accordingly.

Sound is key in this type of game, as the clatter of citizens and commerce give you a sense of “being there”. Tropico doesn’t disappoint and made me feel a part of the island. Sound is general as you move across the map but focused when you select a building. 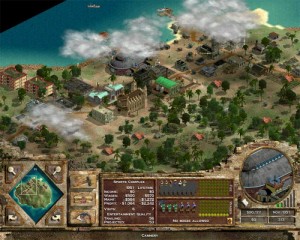 Bringing it all together we get a well-rounded and playable “God” game. While this genre is beginning to feel stale and long in the tooth, Tropico brings enough variety and humour to the table to make it unique. Don’t take my word for it; grab the demo and see for yourself. If you purchase the game, be sure and download the patch immediately.