Blast from the past: originally published October 2000.

A game run that has been near and dear to my heart is the City Building series from Impressions. From Caesar II on I have been an avid fan of building a city, meeting the needs of the citizens and watching everything flourish.  Impressions’ unique concept of having the gamer place the buildings and then watching the people emerge and work the streets has kept me coming back each time. After Caesar 3, Pharaoh and Pharaoh: Cleopatra we see the latest work: Zeus, Master Of Olympus. 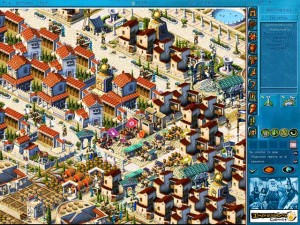 What makes Zeus any different from the others?  The obvious choice is the setting of ancient Greece, with direct involvement from the pantheon of Greek gods.  For those not familiar with the series let me elaborate on the basic premises.

You start each level with a goal; so much housing, goods or accomplishments met to complete.  You then move on to the map; early levels are landscape requiring you to build everything.  You start by building houses, roads, water supplies, food production, distribution, maintenance, culture, etc.  Buildings work in two ways; housing draws settlers in, and all other buildings send out a representative to the community.  For housing to develop and draw more people, it has to be passed by various representatives providing goods and services to that house.  For example: the base housing requires food, water, oil, culture, fleece to evolve to it’s highest standing.  But if it’s close to undesirable buildings such as farms, industrial or trading centers then it won’t fully develop.  You make money by trading goods with other cities, so you have to produce excess goods to trade.  This requires more workers, which you’ll get by improving housing.  Housing is improved by goods and services, requiring more industry and trade.  And so the circle of life goes on, presenting many challenges and a lot of fun. 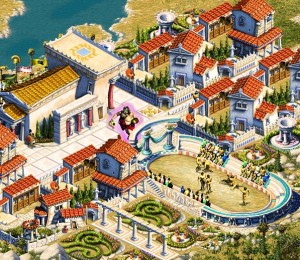 This is the same for all of Impression’s Building series, so if you like to sound of it pick up some of the older titles in the bargain bins.  Zeus expands upon the genre by having direct involvement with the gods; you must build temples to the gods, and then they come to walk the city streets. They then provide benefits; Ares goes with you to war, Aphrodite increases housing.  Hero halls are also built to summon Hercules or Jason to slay creatures on your map.  Both of these buildings require a lot of resources which must be stockpiled before you can summon your chosen deity.

Another addition is the ability to keep other cities as vassals and receive annual tribute.  The world map shows various city states that you trade with; you can spy, send an army or wrangle tribute from your neighbours.

Restrictions on housing evolution have been loosened as well; now two classes of housing are available, base and upper class.  This provides two benefits; each class of housing now doesn’t have to take so long to reach their peak, and can’t fall so fast when things get rocky in the city. I’ve found that each successive game from Impressions has relaxed the rules of placement, distribution and evolution of structures to give more enjoyment to the gamer.

Along with farms and fishing wharves, sheep and goat herding is provided as a food source.  The animation has a more cartoony feel, and everything about the game is more light hearted.  The sounds of city life are excellent, and the music stays in the background.

A winning strategy for improving the series, but I get the feel as I play through it that Impressions’ run on building empires should come to an end.  Even with the boatload of changes, you’re still going through the same motions of build, monitor and advance.