Blast from the past: originally published December 30th 2002.

Christmas is almost upon us, so that means our loved ones have to buy us something. They’re looking for dropped hints, circled catalogue pages and the like. For gaming enthusiasts, this is a frightful situation. These best intentioned people will wonder into a computer shop and say “what game should I buy my son/boyfriend/nephew?” And how the salesman will love to dump some piece of crap, assuring the purchaser how every gamer wants this title. Lucky for us Microsoft has launched a major ad campaign this season for it’s latest PC title, Age Of Mythology. 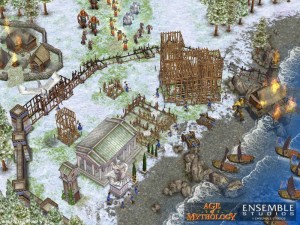 In case you’ve just slipped out from under your rock, this is the third in a series of real time strategy games developed by Ensemble Studios. Defining real time strategy (RTS)games is simple: you collect material, build a base, pump out troops and massacre your opponent. Troops break down into a rock-paper-scissors scenario, with each unit able to slaughter something, but can also be slaughtered by something else. In the end it’s all about balance. Of course that’s a very simplistic definition, but we do have to appeal to the lowest common denominator.

I’m sure if you play PC games you’ve run across other RTS titles like Age of Empires, Warcraft, Starcraft, Command and Conquer or Dune II. Each one a great game, giving us the same basics but in different settings and backdrops. Whether it’s barbarians, Greeks, orcs or Fremen, there’s nothing like managing your group of people into a fighting force and smashing all who dare oppose you.

Which brings us, finally, to Age Of Mythology (www.ageofmythology.com), or AoM. This time around you’ll command ancient Greeks, Egyptians and Norse to battle an ancient evil and save the world. The single player game weaves a fairly compelling story through 36 missions, progressing through in-game cinematics before and after each mission. It was nice and explained why you as the player was moving around the globe. Of course people play to fight, not to save the world. 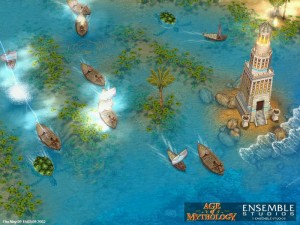 AoM differentiates itself from the pack by involving the pantheon of gods that each of these civilizations was known for. During each mission you progress to four different ages, allowing for new units, technologies and powers. To make each player unique you choose of one two different gods for each age. These gods grant unique powers and myth units; mythological creatures that are costly but powerful. A nice twist and definitely a standout feature.

Another “new” item in the RTS field this year is the hero, a very powerful unit that is regenerated on the battlefield ad infinitum. Not enough to sway the game, but helpful early on when you’re getting your butt kicked.

Graphically AoM is very nice. Ensemble Studios has created the game using a 3D engine, allowing for a lot of eye candy. Seaweed moves with the waves, trees look natural, and of course units stand out nicely. Some items are a tad blocky, but that comes from the small sizes and detail required. It didn’t take away from the game at all.

Moving use along to gameplay. Each civilization has completely different units, doing mostly the same thing. Greeks have archers, Egyptians have slingers and Norse have axe men. All of them are a projectile unit, but are varied enough to flesh out the game. The unit balance is great, forcing you to have a variety of troops to counter your opponents. Not like the old days when you built one über mensch and flooded the enemy, a.k.a. the “tank rush”. You know who you are. When you finish the single player game, move on to internet opponents or design your own levels via the mission editor. It’s the game that never ends. 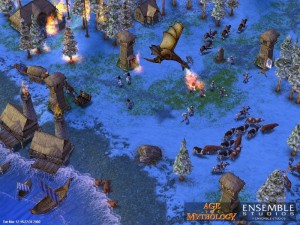 A few problems. The RTS genre really hasn’t changed from Dune II ten years ago. Of course the same could be said for first person shooters like Wolfenstein 3D to Unreal II. I played using Windows XP Professional and my ATI Radeon 8500 video card. Even with the latest drivers I was getting video lockups at random intervals. Annoying, but frequent saves allowed me to finish the title without throwing something.

Let me sum it up: Age Of Mythology is a great game if you like real time strategy titles. Nice graphics, smooth gameplay and enough new items to make it fresh. Don’t take my word for it: download a trial version from the link listed above.