Blast from the past: originally published February 4th 2002.

So much has been made of Windows XP product activation, with every major PC magazine carrying a feature article and countless online rants, that I felt it was covered to death. The information had been presented to me at the product launch held by Microsoft that covered all there was to be said, but I had encountered a number of variables. 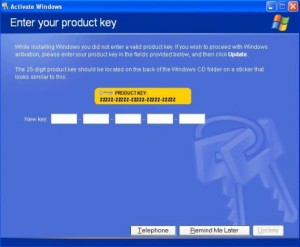 Here and there I had read that product activation was required, but you could upgrade pieces of hardware without reactivating. I was told seven hardware items could be upgraded, or four if one was a network card. Then later at a TechNet session I heard the number increased to nine, then down to five in a Microsoft press release. Here’s the straight goods from Microsoft:

WPA works by associating a machine’s PID (which is derived from the product key) to the hardware configuration. It does this by creating an installation ID. The installation ID comprises the PID and a “hardware hash,” which is derived from a number of elements that characterize the machine. It also includes a random component that is generated each time it is requested.

In order to activate the machine, the installation ID is sent to a Microsoft license clearinghouse, which validates it. The clearinghouse returns a corresponding confirmation ID that is then used to activate the machine. After Windows XP has been activated, reactivation should only be necessary if the operating system is completely reinstalled, or if machine’s hardware is substantially changed.

Users must activate Windows XP with their unique product keys within the defined grace period. For the released product, this is 30 days from the time the system is installed—MSDN versions have 60 days. After expiration, Windows will disallow interactive logons until the system is activated.

If you overhaul your computer by replacing a substantial number of hardware components, it may appear to be a different PC. You may have to reactivate Windows XP. If this should occur, you can call the telephone number displayed on the activation screen to reactivate the software.

No mention of how many devices can be changed, but “substantial number” sounds like more than a handful, doesn’t it? Let’s take one last look at Microsoft on their “technical details”:

How many components of the PC must change before I am required to reactivate? Are the changes cumulative?
Common changes to hardware such as upgrading a video card, adding a second hard disk drive, adding RAM or upgrading a CD-ROM device will not require the system to be reactivated. The changes are cumulative; however, if a user is asked to reactivate, the hardware profile is reset to that new configuration.

Well, that’s all the information one could want about product activation. But where is this going? I recently upgraded my main system’s motherboard from a Gigabyte GA7VTXE to a Gigabyte GA7VTXE+; I did it because the opportunity arose to sell the old and get the new for the same price. The only difference between the boards is the South Bridge chipset which allows ATA133, and a few cosmetic changes.

I swapped out the old board and installed the new. Since the IRQ layout was the same for both boards, I installed the cards in the same slots. Upon reboot everything was the same; no new hardware was found since it was all the same except for a small piece of the motherboard.

Just as Windows XP Professional came up fully, I was confronted with a message indicating my copy of Windows needed to be reactivated. There were two options: reactivate or cancel; choosing cancel brought me to the shutdown dialog box. I rebooted but got the same options, so I chose reactivate. I could do this over the internet or telephone; I tried the internet but it told me I had to call. I chose my home country and dialed the toll free.

Once connected I was led through a maze of telephone options culminating in my entering the 26 number product ID; I did this via the touch pad on the phone and was then sent to a live operator. He was friendly and courteous as he asked me for the product ID; I asked him why he didn’t have it from me entering it on the phone, but didn’t get an answer. I explained my motherboard upgrade situation and asked a few questions; he couldn’t provide any answers but was always polite. I read off the product ID and he read me an activation number that I entered. Two more clicks and I was working again.

The moral of the story; make sure you have a legitimate copy of Windows XP if you like to upgrade your hardware. And even if you have to call for reactivation, it’s not so bad after all.