Blast from the past: originally published April 3rd 2001.

There’s only one way to describe Counter Strike; a PC phenomenon.  For those few who haven’t heard of it, here’s a short history.  Half Life, a first person shooter with an excellent plot and gameplay, was released some two years ago.  With it came the ability to make modifications to the game and make new graphics, sounds and environments, collectively titled “mods” by the gaming community.  The most famous of Half Life’s mods is called Counter Strike, and is a strictly multiplayer game of terrorists versus counter terrorists.  It has become popular enough for Sierra to release a retail version of the game, and at any given time has thousands of players logged into the servers.  I had read about it here and there, but didn’t bother installing my copy until two weeks ago.  Big mistake; now I’m hooked and spend all my free time taking down terrorists with extreme prejudice. 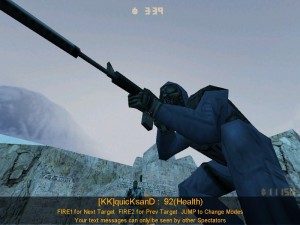 What’s enthralling is that this a complete modification of Half Life; everything from characters, weapons and animation to maps and structures has been changed.  The two main designers have essentially made a new game using free tools.  Using an existing game engine is common, but normally involves licensing and fees; by using the freely available mod tools and putting in a lot of work the “normal” route was circumvented.

The gameplay concept is so simple as to be completely addictive.  Logging into a server gives you a choice of terrorist or counter terrorist, and one of four groups within those.  These are really just to give a variety of looks for the two groups and doesn’t affect gameplay; it’s good guys versus bad guys.  Once in the game and depending on the map there are two possible goals; terrorists plant a bomb and detonate or counter terrorists rescue hostages.  That’s about it; go through the game killing the enemy and accomplishing your goal. 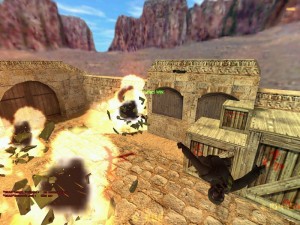 There is a choice of equipment available, divided into five groups: pistols, sub machine guns, rifles, machine guns and equipment.  Firing Squad has recently posted an excellent guide to the weapons of Counter Strike, and I advise to give that a good read.  Items are purchased from money acquired by completing missions and getting kills; if you keep getting killed early every time you won’t build up any cash.  Each weapon has advantages and disadvantages, so you’ll find yourself trying all of them out and then sticking with one or two. I find myself using the Colt 5.56mm automatic rifle with silencer most of the time, as I enjoy the muffled shots and stealth aspect of it.

Aside from the stunning graphics and rapid gameplay, the appeal of Counter Strike is the brevity of missions and the ability to jump right in.  Missions last around four minutes each, or until everyone is dead. If you’ve got 20 minutes to kill you log in, play five games and leave.  The entire game is about fast action and quick reflexes; it gets you going.

There are two ways to get Counter Strike; buy the retail version or buy a copy of Half Life and download the Counter Strike mod.  Either way it’s a great investment and a great waste of time.