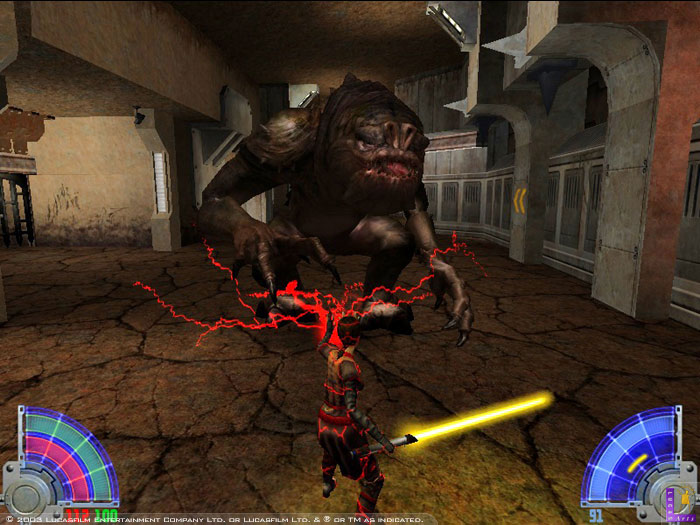 Star Wars Jedi Knight: Jedi Academy is an easy win for longest game title of the year. Fortunately it’s also the best first or third person shooter so far this year. This time around is the most immersive game in the Star Wars universe, or more specifically the world of the Jedi.

Any guy after watching a Star Wars film has the overwhelming urge to run through a pack of storm troopers swinging a lightsaber and doing heavy damage. Jedi Academy puts you in the role of a new student under the tutelage of Luke Skywalker at the, surprise, Jedi Academy. You uncover a big conspiracy and battle those who would use the power of the “dark side”, some years after Return Of The Jedi. Same plot as the rest, but the important thing is you get to become a Jedi Knight and kick serious ass with a lightsaber.

The game is basically broken into three parts, each with seven missions and big double sized mission in between. Levels range from frozen landscapes to city rooftops to ancient temples. Varied and fun. I blasted through the game in about twenty hours total, so I found it fulfilling but short. 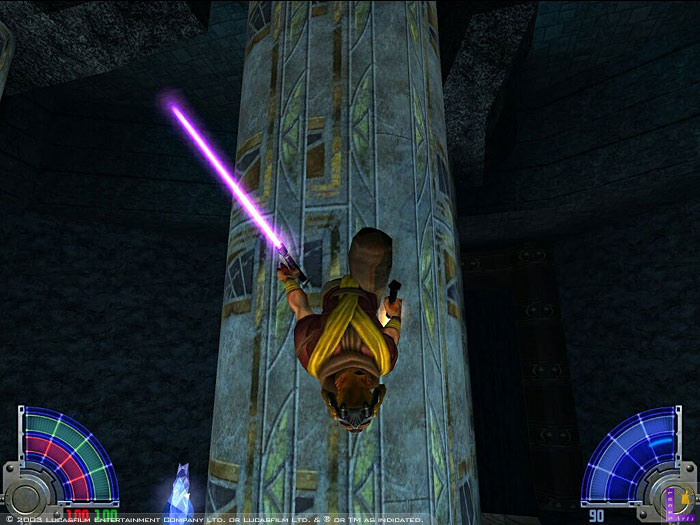 You begin as a new student and choose your lightsaber handle and blade colour. As you finish each mission you’re given a force point to put into one of eight additional force powers: four light powers and four dark powers. I say additional because eight core force powers advance as you develop in the game. Core powers include push, pull, lightsaber throw, that kind of thing. The additional powers are where the funs lies: I maxed out heal, lightning and choke. If you spend too many points of dark powers you get a talking to from Luke, as the Jedi Academy is concerned you maintain a balance. Eventually you become a Jedi Knight and get to choose one of three lightsaber types: standard with three attack styles, dual lightsabers or the Dark Maul lightsaber staff. I chose the staff and never looked back. Well, I did look back by replaying that mission and trying all three types but found my first choice was the best.

Jedi Academy is all about action, and it delivers in spades. While you can use ranged weapons and explosives, you never have to leave the lightsaber. I used it throughout the game and fared quite well. When combined with force powers you can’t go wrong. Classic uses are force lightning when facing groups of enemies, as it fries them all. Facing enemies with force powers or lightsabers I used force choke on them for a little softening up, then moved in for the lightsaber kill. Of course you can’t forget about the lightsaber throw, a truly classic move. 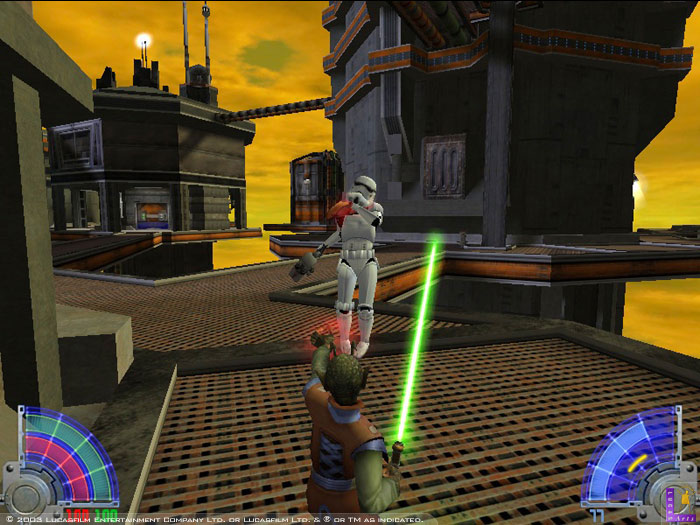 Combat is smooth and easy with the lightsaber: combinations of movement and keys give special attacks which do big damage but leave you open. The enemies vary from useless to truly challenging: at least two battles lasted more than five minutes. That’s a lot of slashing, healing, choking, etc.

This leads us to graphics and sound, or the game environment as a whole. I enjoyed the environment, as the levels were well designed and gave a decent sense of immersion. The action kept you moving so there wasn’t a lot of staring at walls, except for the various puzzles that I hate but people must enjoy since they keep show up.

Let’s sum up: Star Wars Jedi Knight: Jedi Academy is a must play for any and all Star Wars fans. Check it out at www.lucasarts.com and grab a demo.

Editors note: this review was migrated from the old eBabble.net site and the photos updated. Originally published September 5th 2003.