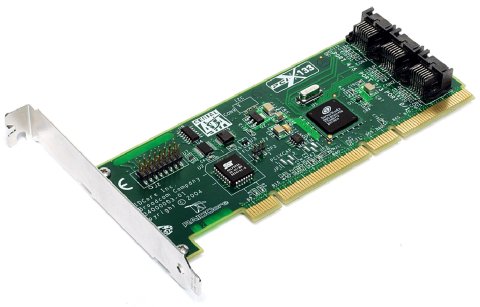 The above encapsulates the features of the RAIDCore controller, as defined by Broadcom. RAIDCore is now part of the Broadcom family, but a new addition. I couldn’t find anything on the Broadcom site by means of navigation and search, so I went to the old www.raidcore.com URL and was redirected to the proper page. Read the above and check out the links to get a good understanding of this product group.

In an interesting turn of fate I was contacted by the RAIDCore PR rep months ago regarding the site, and I was quick to request a review unit. Unfortunately they were in the process of merging into Broadcom and switching over to the BCM5770 controller chips. Some time passed and I received my shiny new BC4852 SATA RAID controller, my first for a PCI-X 133 slot. I had to test in a 64 bit 66 MHz slot in my test configuration since that’s what I have and I can’t seem to get a deal on a new Opteron board and the new Xeon boards aren’t available yet.

Luckily I did wait on the card, since there were some issues with the RC4000 series controllers. Broadcom is offering a card replacement, so if you have an older RAIDCore card take advantage of this offer. Broadcom is also working to remove the “RAIDCore” name from the product, or so it seems.

Let’s jump to the chase and talk about performance, then take a step back and look at the card and it’s features and interface. Open our benchmarks and look for yourself: the BC4852 stands shoulder to shoulder with the rest of the pack. It leaps ahead in WinBench, and in Atto and HDTach writes. The only issue to show itself is a high CPU utilization, 11-25% depending on which benchmark you believe. This is because there is no onboard cache or XOR engine. They’re depending on your system having a reasonably fast CPU.

Looking at the BC4852 you’ll see a clean design. Without cache or a dedicated processor there’s room to spare. In the center is the BCM5770 controller chip, to the right six SATA connectors with two on the other side. On the left are eight pin headers for individual HDD LED connections, if you want to connect your drive cages that way. As well on the back of the card are eight small lights that flash as the array is utilized. It’s a low profile PCI adapter that comes with a PCI MD2 low profile bracket.

The key to the BC4852 is it’s rich feature set; just read the laundry list on the previous page. Let’s touch the highlights, most of which center around the ability to make changes to the array without bringing it down. The two biggies are RAID expansion and RAID migration; while the array is in use you can expand the capacity or change the RAID level. It’s not a quick process, but it works. Move from a RAID 10 array to a RAID 5; the only catch is that you can’t go to a smaller array, so no four disk RAID 5 to RAID 10 migrations. Add disks to your array and then expand it. Once you’re done expand the formatted partition with Microsoft’s diskpart utility.

Lots of other goodies as well. Up to four BC4852 cards can be used in one system, with arrays stretched across. Multiple arrays can all use the same hot spare drive, minimizing disk waste. The controller marks the drives, so they can be unplugged and reconnected in a different order without breaking the array. Staggered spin up allows each disk connected to spin up in order, so there’s not one power draw on boot up. Options abound, and all are well documented in the included PDF and HTML manual. This covers the entire spectrum of using and working with the BC4852 and should be an example for all manufacturers. It sounds geeky but it was a very enjoyable read, and provided all the information most would need regarding RAID. The drawback is a lack of printed material in the box.

Installation was smooth and straight forward. Creation and management can occur through the BIOS or via the RAIDConsole application. I used both without incident. The RAIDConsole is very easy: there’s one screen to work with, and right clicking on objects gives context options. It can also be run from the command line, but I didn’t try it. Inside the box was the controller, eight half meter SATA cables and a CD. 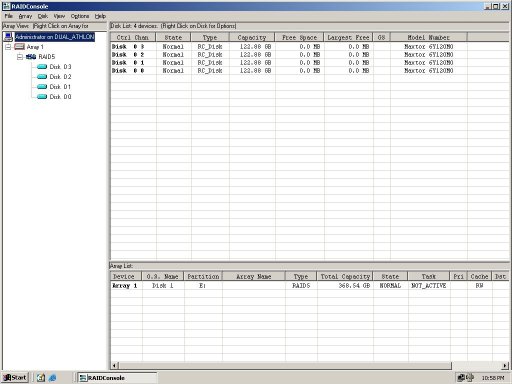 Once an array is created a full disk integrity is run, referred to as initialization. The array can be used immediately, but a performance hit obviously takes place with the initialization is occurring. Every option available can be performed from the RAIDConsole interface.

There has been a lot of talk about RAIDCore and availability since it’s initial launch last year. A where to buy page is available from Broadcom, and I checked PC Mall for pricing and availability: $385 US. That price puts it in the mid range of SATA RAID controllers.

Bottom line on the Broadcom RAIDCore BC4852: it’s a feature rich SATA RAID Controller that provides good performance. If your server is running a 1.5 GHz processor or higher then you won’t be hit too hard by the BC4852 using the host for XOR calculations. Each of use and feature set make it an excellent choice.

Editors note: this review was migrated from the old eBabble.net site and the photos updated. Originally published August 10th 2004.