After I stopped collecting weekly comics and focused on collections instead the first few months were relatively light since I was waiting for recent issues to be collected.  During that time I picked up a few titles that were off my beaten track: older newspaper comic collections or foreign material.  One such book is It Was The War Of The Trenches by Jacques Tardi.  Here’s the publisher’s blurb: 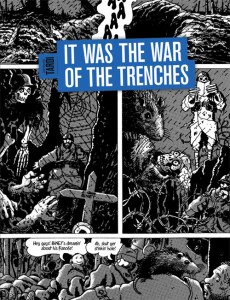 World War I, that awful, gaping wound in the history of Europe, has long been an obsession of Jacques Tardi’s. (His very first—rejected—comics story dealt with the subject, as does his most recent work, the two-volume Putain de Guerre.) But It Was the War of the trenches is Tardi’s defining, masterful statement on the subject, a graphic novel that can stand shoulder to shoulder with Erich Maria Remarque’s All Quiet on the Western Front and Ernest Hemingway’s A Farewell to Arms.

Tardi is not interested in the national politics, the strategies, or the battles. Like Remarque, he focuses on the day to day of the grunts in the trenches, and, with icy, controlled fury and disgust, with sardonic yet deeply sympathetic narration, he brings that existence alive as no one has before or since. Yet he also delves deeply into the underlying causes of the war, the madness, the cynical political exploitation of patriotism. And in a final, heartbreaking coda, Tardi grimly itemizes the ghastly human cost of the war, and lays out the future 20th century conflicts, all of which seem to spring from this global burst of insanity.

Trenches features some of Tardi’s most stunning artwork. Rendered in an inhabitually lush illustrative style, inspired both by abundant photographic documentation and classic American war comics, augmented by a sophisticated, gorgeous use of Craftint tones, Trenches is somehow simultaneously atypical and a perfect encapsulation of Tardi’s mature style. It is the indisputable centerpiece of Tardi’s oeuvre.

Tardi’s technique for this book is very interesting: he recounts soldier’s tales, over and over.  Each is horrible and dark, fully illustrating his overall theme that World War One was a tragic waste.  It’s a compelling and difficult read: there are no uplifting moments, just more of the same death and despair experienced by the foot soldiers.  In his foreword Tardi states “The only thing that interests me is man and his suffering, and it fills me with rage”.  That rage is funneled at the generals and politicians during WWI and their utter disdain for the life of the common man.

There is a steady progression and pace: it starts with new arrivals and their view of the front and progresses into darker and more sobering experiences.  Tardi even relates his grandfather’s experiences in a text only centerpiece.  Each new tale draws you a little more into these biographies until you’re right there with them in the trenches, accepting and reviling what was endured.  It’s a hard read and at times felt like work to get through; Tardi finishes with raw statistics of the dead, maimed and destroyed.

The art style is rounded and has a soft finesse.  The book is black and white and Tardi made good use of grayscale.  The soldiers have a haunted, tired look in their eyes and facial expressions that really reinforces the text.

After finishing the last page and closing It Was The War Of The Trenches you’re struck by the feeling this book needs to be read: everyone should know what went on so that we can work to ensure it doesn’t happen again.  There’s a filmography and bibliography at the back should you wish to further explore the subject.