I picked up Stalin’s Ghost on the bargain table at a local bookstore.  Martin Cruz Smith rang a bell but I couldn’t place it; the description sounded interesting.  Here’s the official blurb: 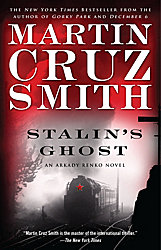 Investigator Arkady Renko, the pariah of the Moscow prosecutor’s office, has been assigned the thankless job of investigating a new phenomenon: late-night subway riders report seeing the ghost of Joseph Stalin on the platform of the Chistye Prudy Metro station. The illusion seems part political hocus-pocus and also part wishful thinking, for among many Russians Stalin is again popular; the bloody dictator can boast a two-to-one approval rating. Decidedly better than that of Renko, whose lover, Eva, has left him for Detective Nikolai Isakov, a charismatic veteran of the civil war in Chechnya, a hero of the far right and, Renko suspects, a killer for hire. The cases entwine, and Renko’s quests become a personal inquiry fueled by jealousy.

The investigation leads to the fields of Tver outside of Moscow, where once a million soldiers fought. There, amidst the detritus, Renko must confront the ghost of his own father, a favorite general of Stalin’s. In these barren fields, patriots and shady entrepreneurs — the Red Diggers and Black Diggers — collect the bones, weapons and personal effects of slain World War II soldiers, and find that even among the dead there are surprises.

This is Smith’s sixth novel with Renko as the lead character but this is my first experience with this author.  It was an excellent spin on the detective schtick we’re used to from a North American perspective: life in modern Russia and it’s quirks lay the background for an excellent investigation.  Renko is worn down and an outcast and I’m sure reading his other five appearances would flesh that out it wasn’t needed to enjoy this sixth episode.

Since Stalin’s Ghost takes place in modern Russia the names were a bit difficult for me to follow in the beginning but that fell into place as I became engaged in the storyline.  Character development was excellent for the major players: as the reader you get everything you need from the author.

I appreciated the background details and descriptions as we’re looking at a world few westerners have seen.  Like most police/detective stories we see the grim and gritty underside of a society but it fits.  All in all an excellent read.