Last month my son and I took two days and visited most comic shops between Scarborough and Stoney Creek. Please give that a look before continuing here as I’ll be making references to that post.

This time around we decided to take a Saturday and visit all the comic shops between Kitchener-Waterloo and Brantford, including Guelph. It was a much smaller number, with ten stores total. We were able to visit 8, with one closed at 2 PM on Saturday (really) and only time to visit one location of The Dragon.

Neither my son John nor I had anything in mind or a want list this trip, but we both were ready to dig into every corner and search for buried treasure.

Because of geography and available time, we began in Guelph and moved to Kitchener-Waterloo, Cambridge, and finally Brantford.

Two comic shops stood out: The Dragon and Carry-On Comics. The rest were average, catering to their local market with new comics, some back issues, and a variety of collected editions. What differentiated these other stores was their customer service or lack thereof. One shop had a sign in their window that they were closed for 15 minutes. We waited 40 minutes for the owner to return, who then ignored us. As we left a boy was urinating against the side of the building, so I’m guessing we both had the same customer experience. The smallest store with the least inventory had a wonderfully engaging employee or owner who asked really great questions as we browsed.

The Dragon won the Will Eisner Spirit Of Retail award and an honourable mention under the Harry Kremer Retail Award, as one of the owners ran that award for some time so The Dragon wasn’t eligible. This store exemplifies what a comic shop should be, bar none. Every item I checked off last post about what to look for in a comic shop is covered at The Dragon. I was greeted by staff as I entered and then approached a little later to see if I needed help. The store is bright, clean, well organized, well-stocked without being crowded, and an overall delight. I had to ask about two Artist’s Editions on display as they had no price, but they are high up on the shelf and few could reach them other than myself. Everything else I picked up was priced, either with the Canadian cover price already listed or a price sticker. I kept picking up book after book and marvelling to my son what an excellent selection they had; they were all books I already had, but so many!

Carry-On Comics had an excellent selection of material with something for everyone. They did everything well, but it was our next stop after The Dragon and it’s hard to compete. They were a little overcrowded, a little dusty, a little more reserved in their customer interaction. Having said that, I bought a bunch of stuff here and nothing from The Dragon. Everything was either priced or you could refer to the U.S. to CAD price charts posted throughout the store. I picked up some out-of-print Carl Barks Library volumes and then spotted all seven volumes of Valerian The Complete Collection. They had them for $230 so I asked what the best price was and the owner came down to $199. My son was amazed: “you asked and he dropped the price $31”. I told him there was no harm in asking, and either party could say no. As well they had a “previously enjoyed” section with a variety of collected editions for half price or less.

It’s a double-edged sword to ask for everything a comic shop should be and then grumble about paying full price, but I will anyway. Even if the shop can work in a small sale section, just to give those of us looking for a bargain something to peruse. I know I’m looking for older or out-of-print material, so newer shops won’t have anything for me.

Artist’s Editions made several appearances throughout the day, but no bargains. Prominently displayed, except for the one warehouse store where I pulled two out from a pile of cardboard. Almost all of them were out-of-print volumes, so they were old inventory. The Dragon had the latest, EC Covers Artist’s Edition, but I couldn’t get it out of that new comics display. 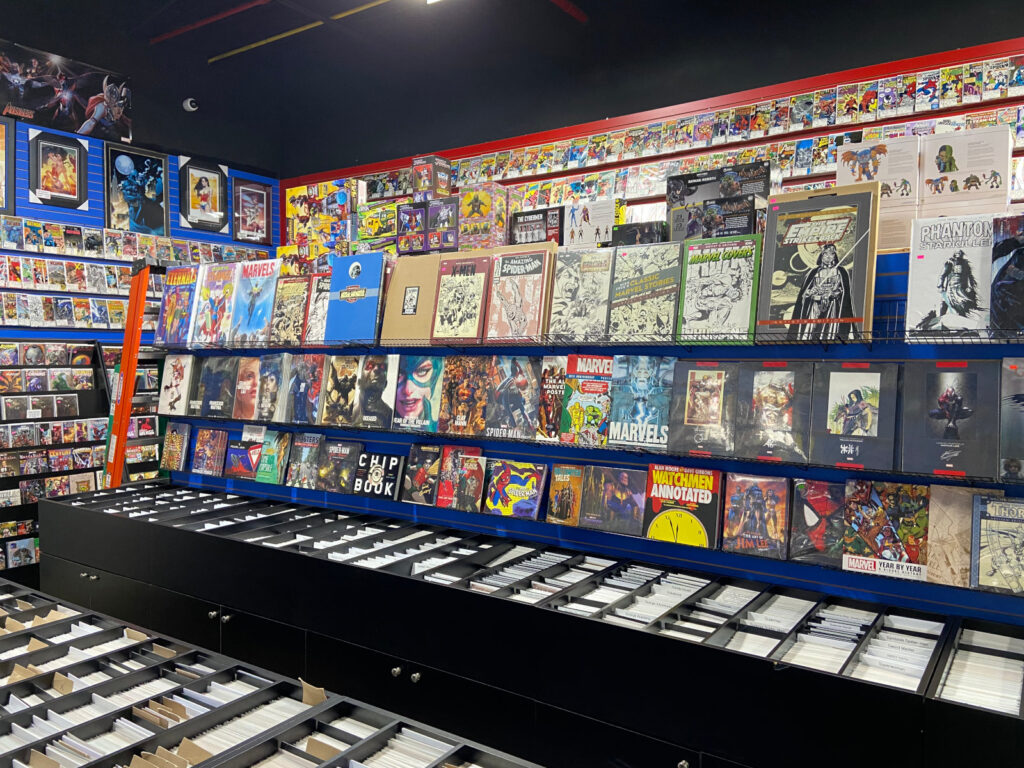