I still had a lot of 35% creme in my fridge so I was looking around for things to do with it and came across a recipe for creme fraiche.  Let me start off by saying I’ve never had creme fraiche before so I have no context to base my end result, but I’ve seen it many times on television and in magazines. 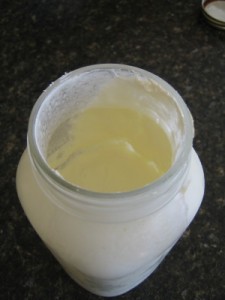 It’s very easy to make: take heavy cream and add buttermilk to it.  Heat one cup of heavy cream slightly to 110 degrees, pour it into a container and add two tablespoons of buttermilk.  Keep it warm for 24 hours by either wrapping it in a towel or putting it into the oven with the light on, then refrigerate. 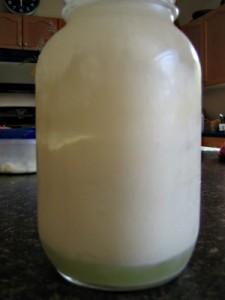 What you end up with is a ridiculously rich sour cream: tangy but not sour.  After about three days in the fridge my creme fraiche was runny and not thick at all so I thought I had gone wrong somewhere.  Checking it after two weeks the whey from the buttermilk had settled to the bottom and I had an incredibly thick creme fraiche.