Blast from the past: originally published April 18th 2002.

I’ve just finished the single player game of Medal Of Honor: Allied Assault ( MOHAA ) and all I can say is “wow”. Like most I’ve grown tired of the first person shooter single player game and sought out online action in Counter Strike and Day of Defeat. How many times can you move through levels killing everything in your path, meeting so-so AI ( artificial intelligence ) and flicking switches. After playing MOHAA it seems worth doing one more time.

Here’s the background story: it’s World War Two and you’re an officer in the OSS ( Office of Strategic Services, forerunner of the CIA ). Over the course of six missions and twenty levels you’re all over Europe accomplishing a wide variety of missions. You’ll move from standard hunt down and eliminate to tank driving to sniping to all out assaults. MOHAA keeps the missions fresh enough to maintain interest the entire way.

Gameplay is exciting, challenging and engrossing; everything a game should be.  MOHAA is based on the Quake III engine and delivers stunning graphics through the interactive environment and quality character modeling. Lighting and sound play a huge part, drawing you into every level. There are some straightforward shoot and run levels at the beginning, but as you progress stealth and skill take the foreground.

The best levels involve your character skulking around with a bolt action sniper rifle and a single shot silenced pistol. You need to get up close and personal to kill with the pistol, but it must be cocked after each shot so it has to be “one shot one kill”. The sniper rifle is beautifully used throughout the second half of the game, combining slow and patient movements with lightening reflexes when your opportunity for a shot comes. Excuse me for gushing, but until MOHAA I’ve never been drawn into a game environment so completely. 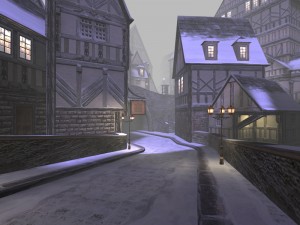 Along with those two there are a bevy of World War Two weapons, American and German. Some unusual choices include a bazooka for one on ones with tanks and a shotgun for hallway encounters. Nothing out of place, but enough choice to satisfy.

Each level has a series of objectives that must be completed. To help you find your objectives a compass sits in the top left corner, with an arrow that points your way. As you get closer to the objective two balls on either side of the arrow move closer together. Of course going straight to the goal usually brings you into the heaviest opposition and certain death, but it guides the way quite nicely.

Enemy AI isn’t too bad for a shooter, with the usual charge and shoot. A few new features include the enemy sticking their weapon around a corner and firing, or peaking over the edge of a crate and sniping. With so much sniper action in the game it’s quite frustrating at times being killed a bunch of times before you even figure out where the shots are coming from. 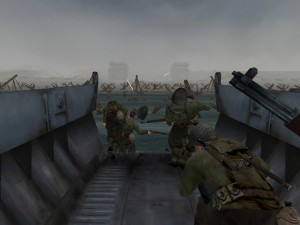 Let me share two great experiences. You’re in a landing craft hitting the Normandy beach. Bullets are whizzing around you as the door drops and those in front get cut down. You tumble into the water and head for protection. All around you shells are exploding, bullets flying and fellow soldiers screaming. It’s a fantastic recreation of the opening scene of Saving Private Ryan. A few levels away you have to clear a town of enemy snipers, building by building. Creeping along the walls you keep switching to scope trying to find the enemies. No sound but your footsteps. Pop your head out and take a quick look. I could cut the tension with a knife. A fantastic homage to Enemy At The Gates.

Requirements to get MOHAA at full detail are daunting, but everything can be scaled down until you’re happy. My main system ran fine at 1280×1024 with every detail set to maximum. I tried a few levels at 800×600 with minimum detail and I was still drawn in completely, but it’s hard to go back once you’ve seen full textures on the buildings, sky and characters.

It took me the better part of three weeks worth of nights to finish the game, which is pretty good by today’s standards. I couldn’t get the multiplayer working; you have to use Gamespy arcade and it never let me connect to a game. I’m told it’s better than Day Of Defeat, but I’ll have to see for myself.

I’d like to take a moment and mention the packaging. Electronic Arts is now using a small box format for it’s titles; basically a cardboard box the size of a DVD case but three times as thick. This is a great step towards ideal packaging, with a DVD case only being the best. CDV is doing this now, as has Firaxis games in the past.

If you enjoy the genre and want a fantastic experience then pick up a copy of Medal Of Honor: Allied Assault. Of course don’t take my word for it: single player and multiplayer demos are available.