Based on the title I get the distinct feeling I should know who Jonathan Hickman is, but I still don’t.  I’ve always been a Fantastic Four fan but I haven’t been reading it for a few years so Fantastic Four By Jonathan Hickman Volume 1 seemed like a good point to jump in.  For some background depth check out this interview.  Here’s the publisher’s blurb: 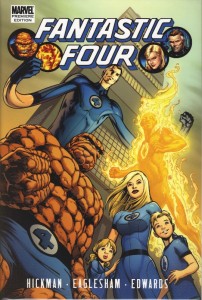 Solve everything! Inside a room kept secret from even his closest friends and family, Reed Richards had scrawled upon the walls 100 of the biggest and boldest ideas his brain could produce. And, recently, he added a 101st, the most audacious ever: “Solve everything.” It would be a mantra that would lead the obsessively intellectual Mr. Fantastic to doing great works on behalf of humanity — and, in typically fantastic fashion, lead him into even greater trouble! For, as the big brain of the Fantastic Four will find out, solving everything carries with it a great cost, and one that is perhaps too much to pay. With art by Dale Eaglesham and covers by the legendary Alan Davis, Jonathan Hickman’s bristling take on the Fantastic Four leads Marvel’s First Family in an exciting new direction! Collecting FANTASTIC FOUR #570-574.

From the get go I was hooked on this story.  Reed Richards, being the greatest scientific mind in the Marvel Universe, has created a bridge to other dimensions.  Once there he meets other Reed Richards who have formed an organization to keep the multi-verse in check.  Along the way chaos ensues and we’re treated to a big old action-y science tale: spot on Fantastic Four adventure I had been missing.  This is mostly a Reed solo story but we get interspersed interludes from the rest of the cast.

I don’t want to spoil it for anyone but the multi Reeds have come up with some great solutions to common problems like mentally imprisoning all the Dooms; things that Hickman put some thought into.  Everything goes to Hell when the Celestials attack through compromising one of the Reeds: there’s a great panel where our Reed escapes and we see a severed Celestial hand.  We also see how Reed’s personal character developed, through his father’s influence and that of his family.  A tough decision must be made and Hickman gives a strong personal element to it that I found highly enjoyable.

Dale Eaglesham does a great job on the art: smooth clean lines, detailed backgrounds, well-defined characters.  It’s solid work and brings story and picture together.  Every once in a while a face looks oddly two-dimensional on a three-dimensional figure: it’s hard to explain but looks off like the face was moved digitally.

That’s the first story arc from issues 570-572: the other two issues have a less than stellar story involving a vacation world and a birthday party.  They scream “fill in” story and have a guest artist.  That’s all I’m saying about that.

I picked up the Premiere Edition hardcover but it’s no longer available so I’ve listed the trade paperback below.  It’s a decent value at $16 for 144 pages.  If you can get it in hardcover and enjoy the extra size and collected covers from the issues.