Iron Lore and THQ have finally released an expansion for the hit game Titan Quest. I played through the original twice: you can play it three times, each at a new difficulty level. To be clear, this review is for those who have already played Titan Quest and want to know about this expansion pack, Immortal Throne.

As I said I finished Epic mode in Titan Quest and was anxious to play Immortal Throne. After installation I imported my existing player and started in Normal mode. I saw immediately my character was far too powerful so I quit, deleted my import and re-imported my character. This time I started in Epic mode and had no trouble. This in itself was a great experience for an expansion pack: the developers actually looked at where players would be in the game!

This time around, since you’ve cleaned up practically the entire ancient world, your character is sent to Hades to deal with stuff there. New monsters, levels and more equipment keep you interested.

Immortal Throne has a bunch of new features: let’s look at them one at a time. Biggest thing is the auto sort in your storage; click to arrange items automatically. Simple and available in like-minded titles. Next up is the artifact, a new item that is created by an Enchanter in big cities. You get an arcane formula, unique item(s) and completed relics or charms all together plus a ton of money and the Enchanter makes an artifact for you. Three levels of artifacts give increasing bonuses and skills. I played through the entire expansion and was able to complete one lesser artifact; the big problem is locating any of these unique items. A new spot on the bottom left of your character screen equipment layout is the place to put your artifact, if you can make one. Also new is the caravan, an extra storage space in major cities that allows you to stash extra equipment you want to keep but not carry around. I put all the set pieces in the caravan; after playing through Titan Quest twice and Immortal Throne once I still never completed an armour/weapon set. The tombstone is nice and appears when you die; run your character back to it and reclaim some of those lost experience points. Spell scrolls are found along the way and do some impressive damage. There’s also a new Dream mastery that the game suggests is used as a secondary mastery, but since I had Warfare and Defender already it was a moot point. 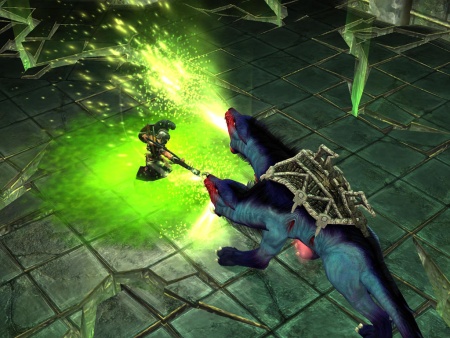 This screenshot shows what was for me the hardest creature in the game, Cerberus. You get locked in a room at the end of a level with him and he has three attacks that killed me about fourty times until by luck I finished him off.

I find playing this sort of quest RTS game gets me doing one thing: looking for new items to equipment my character with. I kill the monsters and enjoy the challenges, especially the boss monsters, but it’s getting new weapons and armor that keeps me going. Titan Quest and Immortal Throne deliver on this, and I very rarely got bored. It’s only when your character is too powerful that you feel it’s a waste of time: Immortal Throne kept me going, a few hours every night until it was completed. If you enjoyed Titan Quest then grab this expansion pack.