I read the entire Walter Simonson run on Thor as they were published during the 80s: it was my favorite book and I was completely captivated by the story.  I even hung on when Simonson stopped doing the art and strictly wrote.  That run and Miller’s Daredevil are highlights of my early comic reading.

Was recently culling my collection and trading in some trade paperbacks to my local comic store when I came across Thor Visionaries: Walter Simonson Volume 1.  Nostalgia got the better of me and over the course of a few days read through this work.  Wow, I was completely taken back and the story had the same effect on me all over again.  Here’s the publisher’s blurb: 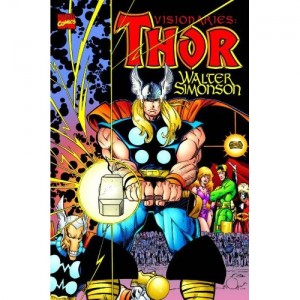 Few people have ever left their mark on one character quite the way Walter Simonson has. His work on the Mighty Thor swept the Norse God of Thunder to heights never before seen and rarely achieved in his wake. Spanning epic tales of heroism and treachery, love and war, Simonson’s work is often considered the definitive Thor. From the majesty and mystery of fabled Asgard to the gritty streets of New York City, Thor was never the same. That is the mark of a true visionary. Collecting THOR #337-348.

From the get go we have two major story elements: a war against the nine worlds and an alien who can wield Thor’s hammer.  While we don’t get into any of it Surtur and his army is building and growing, with the closing page of this volume finally revealing the demon.  But that’s getting ahead a bit.  First we meet Beta Ray Bill, an alien who is of such noble heart that he can pick up Mjolnir, Thor’s hammer, and wield it.  While that’s happening we have Balder wandering around trying to find purpose for his life, plus two or three other continuing story threads.  Simonson liked to keep a lot happening and there really wasn’t a dull moment: the story, character development and environment were all exceptionally well written and connected.

Looking at the art you know it’s pure 80s going on.  Even though we’re treated to good quality paper four colour printing is happening in all it’s glory with dots everywhere.  But then I wouldn’t want it any other way.  Simonson’s art was top notch: clean lines, excellent detail and very cohesive overall.  I couldn’t help but marvel at how well he was able to draw women; not like today’s buxom artists like Cho and Dodson but with a classic beauty.  Every character is well handled, including the overweight Balder.  My only complaint is some poor costume design whether it be on Asgard or Earth; not sure if it’s the 80s influence again but the outfits are bad.

Thor Visionaries: Walter Simonson Volume 1 is a must read for any comic fan.