This one came out of left field.  I was at my local comic book shop and spotted Taskmaster: Unthinkable on the rack.  I remember reading good things about the series but hadn’t given it any thought; being a light week I picked it up and am I glad I did.  Here’s the publisher’s blurb: 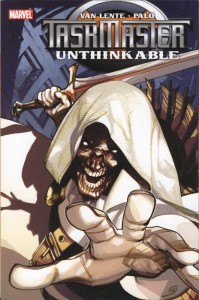 Taskmaster has trained henchmen for every terrorist organization and criminal cartel in the Marvel Universe. So when the rumor starts that he’s turned traitor and now works for Steve Rogers, a billion-dollar bounty is put on his head. Now, every cadre of costumed fanatics — A.I.M., Hydra, Ultimatum, the Sons of the Serpent and more — is looking to collect. Taskmaster must fight hordes upon hordes of his psychopathic students while at the same time uncovering who framed him — which requires him figuring out who he really is! That’s right, the man with the photographic reflexes has no memory of his true identity — and you’ll learn the unexpected truth along with him! The action-packed secret origin comes courtesy of New York Times bestselling writer Fred Van Lente (AMAZING SPIDER-MAN) and acclaimed artist Jefte Paolo (DOCTOR VOODOO)! Collecting TASKMASTER #1-4 and material from AGE OF HEROES #3.

Someone at Marvel went all out with that one.  Fred Van Lente has crafted an excellent story about a relatively minor villain and his search for himself.  We’re treated to a full origin, a deep background and genuine character development, all the while maintaining a wry tone with come great comedic moments.  Good twists and unexpected opponents round out the tale.  Van Lente takes a clean slate approach and builds Taskmaster into someone I want to read about; lets see if he can work on Paste Pot Pete next. 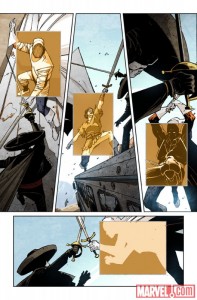 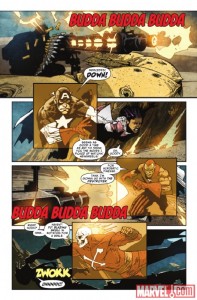 Art is solid and highly enjoyable.  This is my first experience with Jefte Palo and I came away impressed and entertained.  I enjoyed the approach taken to Taskmaster’s mimic ability: when he was using someone else’s fighting technique the character would overlay as shown in the two pages above.

Taskmaster has been a throwaway character or “mort” for a few decades but with his new origin in this well crafted softcover by a refreshing creative team he’s become one to watch.  Extras include covers, Marvel Handbook style info pages on characters and groups featured, two script pages and art breakdowns and completions.  At $15 for 96 pages it’s a bit light but a great read.