Pork prices rose higher than I ever remember them in 2014, due to issues with pork production and high demand for some cuts like bellies. This in turn caused me to cut back on production myself during the year, only producing what my family would normally eat; staples such as bacon and ham.

I have some friends who run a pig farm and they tell me prices will be down to former levels this year. I’ve already seen shoulders and legs for $1.29 a pound this week, much lower than anything last year.

Every Christmas I prepare handmade food gifts for friends, and 2014 was no different. I found a decent piece of boneless pork shoulder in the freezer marked “buckboard bacon” so that’s what I made. It turned out nicely; the recipe is here. I tried going strong on savory elements this year like juniper, garlic and thyme but they didn’t come through as well as I’d hoped. It has a nice ham/bacon flavour and works best fried. 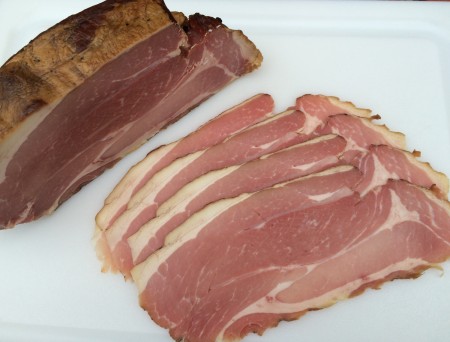 Pork shoulder is a reasonably cheap cut that will yield some nice solid pieces of meat and lots of smaller pieces for grinding or stew. And of course the freezer is your friend for buying meat during great deals and putting it away for later.