I look after a number of HP dx2200 PCs at work; it’s a solid Pentium 4 PC with off the shelf components.  I mention that as all it’s components are standard and not crazy OEM modified items: motherboard, RAM, CPU heatsink, power supply, storage drives, everything can be replaced with a non HP part and continue to work without issue.  I wish the same could be said for most of HP’s other PCs.  Sure the dx2200 case is thin, a bit flimsy and a little noisy but it works, mostly. 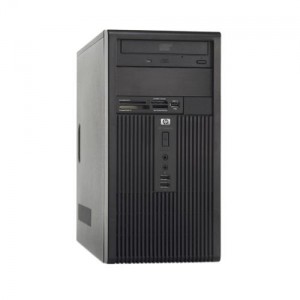 My troubles began about four years after their manufacture date: yes that’s a long time but most PCs can keep going and going.  Started to see hard drive issues: loss of data, problems booting, the normal kind of thing from a failing hard drive.  Except there were no SMART errors, no bad sectors, no write failures.  Re-imaging the PC is standard practice since we’re a large company and don’t have time to nitpick every error, but this only helped for a few days.

These dx2200 PCs all shipped with Windows XP Professional and there is no reason to move beyond that.  Thinking I/O problems I checked to driver updates and noticed an ATI Radeon Xpress 200 chipset was used: this was a standard two chip north bridge south bridge solution with integrated graphics.  The last chipset driver from HP was February 2007 and was the version I was using.  Dead end on the driver front so I turned back to physical testing.

Command Aborted. Please ensure that you are using the version of diagnostic utility corresponding to either newer or older Western Digital drives.

I had the right version based on the information WD provides on the WD800JD page so that left me scratching my head.  On a whim I replaced the SATA cable: the error disappeared and the drive tested without issue.  I put the PC back into production and everything was working.  This was my first failed SATA cable and I was a bit skeptical.  Luckily I had more dx2200 PCs hanging around in the back room that had the same drive errors.

On the next PC I repeated the testing steps and again saw error code 0132 from the Western Digital diagnostics: this time I moved the SATA cable from slot 1 to slot 2 on the motherboard and the error went away and the drive tested with no errors.  For the third PC I simply shut the PC down after receiving the 0132 error and reseated the SATA cable in slot 1.  On power up and testing no errors.  Subsequent problems on other dx2200s were fixed by reseating the SATA cable.

I’m not sure why after prolonged use this motherboard has issues with it’s SATA connectors and needs the connection re-established; at least I know what to do when it happens.  As an aside removing the WD800JD and testing it in another PC showed no errors.