Picked up a Super Micro P8SCT motherboard for practically nothing and had it sitting in my pile of spare components for a few years.  I recently decided to set up a new Windows Home Server and wanted to press this motherboard into service since it has four SATA ports: they’re only SATA 1.5 but since the storage will all be accessed over my network that’s not a concern. 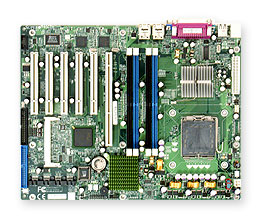 There are some standout features.  The layout is well organized; very sensible.  It has a ton of headers for LED indicators: one each for the two Gigabit ports and the four SATA ports.  The four SATA ports are parallel to the motherboard so the cables won’t get in the way.  The PCI-X slot is unobstructed and will take a full length card.  The area around the CPU socket is clear and will take any cooler you want to use; I’m using the Intel retail heatsink and it’s loud.  Motherboard power connections, 24 pin and four pin, run along the top of the board out of the way.

The last BIOS is from 2006 but it supports USB drives in floppy or hard drive emulation and allows an auto detect feature that chooses based on format: my FAT16 USB drive was emulated as a floppy while my FAT32 USB drive as a hard drive.  Nice!

Let’s look at the not so standout features.  There are five three pin fan headers: two at the top and three on the right side.  No four pin fan header for the CPU and none on the left side of the board for rear fans.  Maximum of 4 GB DDR2 memory support with 1 GB per slot.  I couldn’t get the two pin ATA LED header working; ended up using the first SATA LED header.

Finally let’s get into the bizarre; links are to Super Micro FAQs.  While the P8SCT has the Intel E7221 chipset with ICH6R south bridge the onboard RAID is not Intel but P8SCT uses an LSI ICH6R firmware that support Raid 0, 1, 10.  Intel Storage Matrix Manager can’t be used.  The SATA ports support AHCI in the BIOS but I couldn’t get Windows 2003 to install with either the included LSI drivers or Intel ICH6R drivers; I was forced to leave them in IDE mode.  Throughout the FAQs you’re let to driver packages with different names but they all end up to be the same: LSI MegaIDE RAID drivers that end with a blue screen of death when you add them as additional storage drivers via F6 during a Windows installation.

It’s a solid design and a good performer.