This is one of the few comics I had trouble waiting on the collected edition: a new book from Ed Brubaker and Sean Phillips is reason enough to pick it up, and having just consumed Fatale Book One: Death Chases Me I’m hungry for more.

The first arc of Image’s surprise hit is collected just in time for new readers to jump on board with issue 6! Secrets, lies, horror, lust and monsters from the time before time all collide in FATALE: DEATH CHASES ME. In present day, a man meets a woman who he becomes instantly obsessed with, and in the 1950s, this same woman destroys the lives of all those who cross her path, on a quest for… what? ED BRUBAKER and SEAN PHILLIPS best-selling series will leave you craving more!

This is a classic crime noir story with elements of the supernatural added. A man starts looking into the past of his godfather after his funeral and meets a striking woman who is far more than she seems, ensnaring him into her life. Some dirty cops and a reporter are added to the mix when the story flashes back to 1956 and we learn there’s a lot more than what appears on the surface. It’s a great setup and a solid plot when we’re introduced to the supernatural element: cults, a demon, prolonged life and blood sacrifice.

Fatale is labelled horror but that’s a mistake: it is a pure mystery with some out-of-the-box elements for this type of story. It gets a bit heavy on the blood and carnage early on but that’s not enough to peg this as horror. Interestingly the supernatural elements are far more common in today’s comics than the detective mystery: any Captain America reader would feel right at home with cults, mystery women, demonic leaders and roped in male leads. Brubaker blends enough from different genres to give the reader an engaging and more importantly entertaining read.

With a story told in two eras the characters don’t develop so much as unfold: we meet them today and then learn how they got here. Our anchor point is Josephine, the femme fatale the series is named for. She doesn’t age and has a siren-like appeal to all men, powerless to resist her. Like all good mysteries, we’re only shown what we need to know to progress the story; little clues here and there to keep us guessing and anxious to turn the page. The story is really about survival and what we’ll do to keep it all rolling.

Sean Phillips is right at home in the world of night scenes and shadows, providing a near-perfect look of timeless noir. The supernatural elements fit beautifully into this environment; no disconnects at all. A fairly standard page layout but we’re treated to solid illustration and well-defined panels. Facial expressions clearly provided each emotional state. Kudos as well to Dave Stewart and his moody colour palette.

Fatale Book One: Death Chases Me is a straight collection of the first five issues of the monthly comic: no extras included but we do get the covers. Fans of Brubaker and Phillips’ work will want to jump all over this, as should fans of crime and mystery. 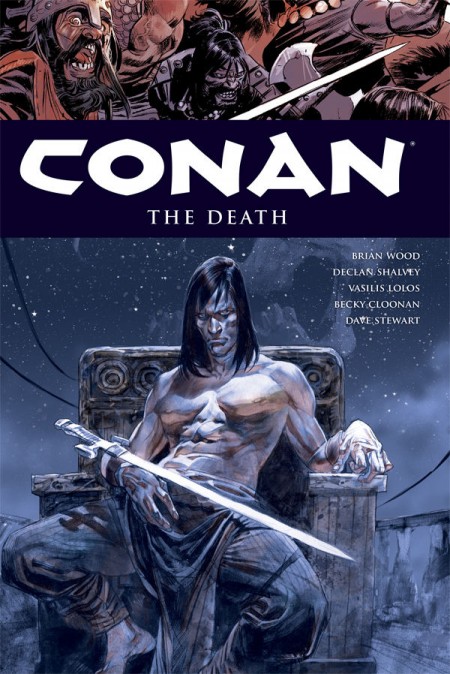