Had seen The Complete Torpedo Volume 1 solicited in Diamond Previews but didn’t know much about the book.  A little internet searching and I found it was a long running Spanish story of a New York hitman in the 1930s: torpedo was slang for hitman or gunman at the time.   Wikipedia gives a little more info: Enrique Abuli started the work with Alex Toth as eight page shorts for Spain’s Creepy magazine but the two parted ways after just two stories.  Jordi Bernet came on board as artist and Torpedo had a nice long run.

Fast forward to 2010 and Jimmy Palmiotti is translating the series for IDW Publishing.  Not to get off topic but IDW doesn’t seem to want people to glean any information from their website: it’s terrible.  I was able to find a blurb about it on IDW’s sales site but it was very poor.  If you want to sell something put as much information as you have on your web site. 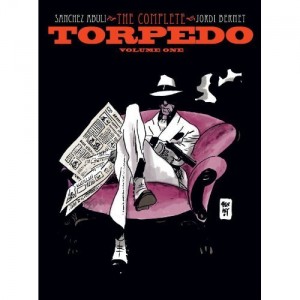 What you get is a 160 page 7×11″ black and white book containing fifteen eight to ten page tales.  The quality of the book is excellent: very nice paper, well bound, clean printing and production.

All tales are told by Torpedo in first person.  He is merciless, cruel and self-serving so the stories take a dark tone; the reason Toth left the work.  You’re not going to develop a love or like for this character: he has no scruples and is a sociopathic criminal, which is a weird way to go for a main character but it works here.  The black and white art fits the character and genre perfectly: heavy ink and scratchy lines give a physical presence to the harsh environment.  The style reminds me a lot of Frank Robbins

After a single sitting reading I’m not sure what I think of Torpedo overall: it’s violent, vulgar and raw in the same vein as The Sopranos.  You get drawn in even if you don’t want to, which says a lot about the quality of Abuli and Bernet’s work.  It deserves another read on my part.

The publishing schedule looks good: Volume 1 was out in January 2010 and Volume 2 is scheduled for March.