With the fourth volume of our continuing series Stan Drake’s The Heart of Juliet Jones, we’re taking a break on the daily storylines and will be delving into the Sunday strips, reprinting Sunday storylines from the first Sunday – May 2, 1954, to August 3, 1958. For this volume we’ll also be reprinting an interview with Drake, conducted by Shel Dorf that originally appeared in David Anthony Craft’s Comics Interview, and more!

This is a completely different Juliet Jones story approach than we’ve seen in the first three volumes of collected dailies. This time around it’s collected Sundays, and they’re all quite short. This makes sense from a timing perspective since even these shorter stories unfold over ten weeks. The key to these Sundays is the romance element, with that being the lead for quite a few of these stories. It’s a change from the dailies where romance was only part of the story: these Sundays make it the focus. This allows for a tight story in the more limited timeframe but leaves a lot of the stories one-dimensional.

The two best stories both involve Juliet’s neighbour Eddie Hearn, a policeman. The first story has the mayor’s wife Mrs. Hatch not stopping for a school bus and hitting a child. Eddie and Juliet witness it, but the mayor and his wife decide to lie and start a smear campaign. The key witness is the bus driver who has his job threatened and lies on the stand. This time Pop Jones steps in and through his kind heart and moral compass saves the day. There is a romance element as well, with Eddie professing to have loved Juliet since they were children. But it’s a small part of the story.

The next Eddie story has him getting sick and learning he could be terminal. This is really about Juliet and Eddie’s mother Mrs. Hearn, long-widowed. Juliet becomes “Florence Nightingale” with Eddie and agrees to marry him. Believe it or not, that’s not Juliet’s only engagement in this volume, but that’s for you to discover. A lot of soul-searching and talking are the focus here, and it provides a wonderful quote, below. Eddie shows his strong character at the end, making this a very emotional and memorable addition.

There are two stories that have no romance whatsoever, but one does deal with matters of the heart. Pop’s brother Clarence shows up and needs a place to stay. He’s always been a bad seed and mystery unfolds. It’s a great deviation from the romance theme and gives Pops the opportunity to shine for a few weeks. The other non-romance story is about Eve, her part-time job as a photographer, and an insurance investigation. It’s full of drama, a little humour, and an overall great story. Eve’s youth and inexperience trip her up yet again, but she’s a Jones and gets to the bottom.

Drake’s art is well defined and full of emotion and expression as always. Because these were colour Sundays and are presented here in black and white, we see less detail in items that he expected colour to be applied to. He adheres to a rigid three-tier page layout with two to four panels per tier. This allows for long panels

The design differs from the other volumes, with the cover changed to a large panel and the text below it. Plus the title shift, for some strange reason. The interior design remains the same, with a single page for a table of contents, colophon, and publisher’s information. No note from Charles Pelto this time around.

The presentation is wonderful, with only one Sunday a little blurred. I noticed a spelling mistake on page 245 of practical and wonder if that was in the original or from the restoration for this volume. This is a glued binding of a medium semi-gloss paper. The book stays open because of the weight of the paper and horizontal orientation, without having to smooth the center.

Along with the strips is an introduction by Roy Richardson, a short piece on Richardson’s impression of Drake in his later years and becoming his art dealer. After that follows a long and detailed interview by Shel Dorf of Drake from 1984. It covers Drake quite well and provides a lot of information to really flesh out the reader’s knowledge after consuming these four volumes of The Heart of Juliet Jones.

This is the last volume in the series Classic Comics Press published. We can always hope for more, but it’s the dailies I’d like to see continue. This is a nice taste of what the Sundays offered, but one is enough unless the strip continued to minimize the romance-only stories. 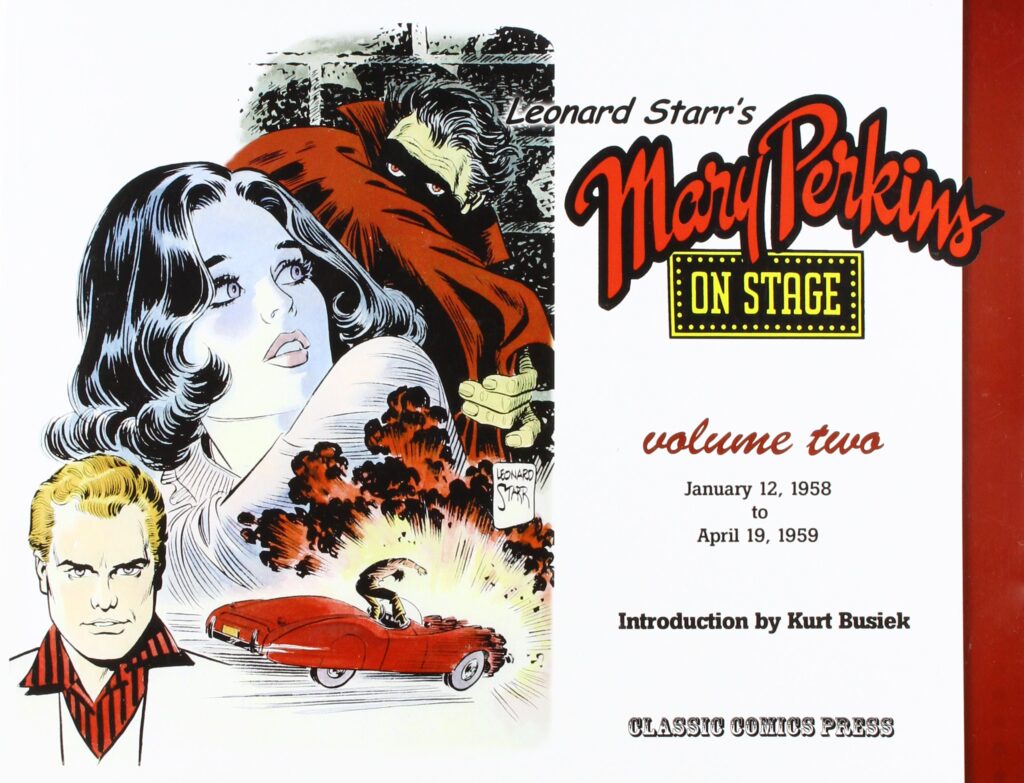