Blast from the past: originally published July 20th 2004.

The lure of a large monitor is strong for those of us who sit in front of a PC all day long. Simply for the fact that we don’t sit in front of the PC, but the monitor. You can view more reviews on their website.
TFT ( thin film transistor ) panels are all the rage, but value and quality come into play with a large CRT ( cathode ray tube ) monitor. 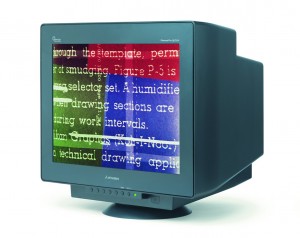 For several years I had used a Sony Multiscan 500PS 21” monitor, but is wasn’t completely flat. Almost flat, but a slight curve none the less. This was my first experience with a huge monitor, and from that point there is no going back. The opportunity arose for me to pick up a Mitsubishi Diamond Pro 2070SB-BK for a real steal, so there was no way I couldn’t buy it. Being a tech follower I was familiar with the NEC Mitsubishi merger on the monitor front, and the overall quality of the design and output. Truth be told this wasn’t the model I really wanted, but a deal is a deal all day long, and not something to be passed up.

Let’s look at that model number. The Diamond Pro is the professional line of Mitsubishi’s CRT monitors. It’s a 20” viewable, 22” tube CRT. SB is for SuperBright, the NEC/Mitsubishi name for a new technology of highlighting or brightening portions of the screen. Last but not least is the colour, BK for black, as are all computer components these days. Or so it seems. This is a flat aperture grill CRT, or DiamondTron. Before you buy any monitor I recommend reading NEC’s Monitor Technology Guide. It gives excellent definitions for all the monitor lingo that will be encountered when reading up on prospective models. They even have it as a PDF!

I’ve used this monitor day in, day out for over a year, and can sum up it’s performance as excellent. I haven’t run Displaymate or any other testing application, but time served I have in spades. At 1280×1024 at 85 Hz or higher everything is sharp and crisp. Corners are tight and there is no moire or pattern issues at the corners.

I ran this resolution until a recent reinstallation of Windows XP, which put the default resolution to 1600×1200 at 85 Hz. Incidentally this is the recommended resolution for this monitor. At this resolution corners and images were crisp, but text appeared slightly fuzzy. Not really all text, mostly white text on coloured backgrounds. I experienced the same issue at work with a Samsung SyncMaster 955DF, a 19” monitor running 1280×1024 at 85 Hz. Everything looks great, but some text is slightly fuzzy. Not sure if it’s my eyes of the equipment.

Screen control is very smooth and easy to use via the button interface along the front. A few moments to familiarize yourself and it’s easy peazy. Of course NEC / Mitsubishi offers NaViSet from their website as a download, which is a utility for Windows 2000/XP and Mac OS 9 and up to make these screen adjustments via a tabbed page in the display properties. Again, very straight forward and easy to use. A few clicks and you’re set.

The 2070SB offers two 15 pin D-SUB connections and an button on the front to switch between them. I prefer a KVM switch so this hasn’t been used. What I have taken advantage of is the four port USB 1.1 hub built into the left side of the unit.

SuperBright is the monitor’s ability to brighten parts or all of the screen for movie or game watching. Activating this via the button achieves the desired effect, but I’m not sure how often this will come into play.

This is a large and heavy unit. CRTs are big and boring next to the fancy LCD flat panels, but games and fast motion require the CRT. It does use a short neck tube, so total depth is kept to under eighteen inches. Even though it’s 66 pounds, the monitor swivels easily on it’s base. There are few things more annoying than having to grab a monitor on both sides and working it furiously back and forth while everything on your desk falls over just to get the height up a few inches.

All in all the Mitsubishi Diamond Pro DP2070SB-BK is an excellent CRT monitor. Bright, crisp and easy to use, set up and adjust. With CRTs going for a song these days, grab one if you have the desk space.