Blast from the past: originally published December 6th 2002. 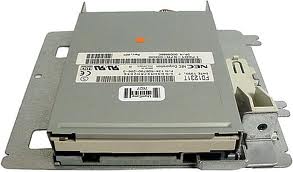 When you look back at the life of the computer, a few standouts have gone the distance. The floppy drive began as the only affordable way people could run programs and trade files, and has carried on in various shapes and sizes. Today all of us have a 3.5” floppy drive in our PCs, ready for those hard little diskettes. Who could imagine a computer without the off white mouse, two or three buttons and a rolling wheel underneath to guide it’s way across the mouse pad. Both are functional, ubiquitous and just have to go. Don’t wait for McCoy to proclaim “they’re dead, Jim” before you look at replacements.

A modern 3.5” floppy drive comes into use a handful of times a year. It’s clean, does the work and costs about $20 new. Blank floppy diskettes hold 1.44 MB of data and come 10 to a box for $5. I use diskettes for two things: updating my BIOS and for boot disks when a computer is acting up. Of course most companies allow you to update your BIOS via a Windows program now, so there goes that reason. And CD writing software lets you make bootable CD-ROMs, eliminating my other reason.

What can you replace the floppy drive with? Two options spring to mind: CD writers and flash memory. The CD writer has become an inexpensive option, costing less than $100. With write once ( CDR ) and write many ( CDRW ) discs available for under $1, it covers the removable media format easily. Of course we’re limited to 650 or 700 MB per disc, but that’s a lot for a portable media. They’ve become so common it’s hard to buy a new PC without a “burner”.

Flash memory is the true successor of the floppy drive, for several reasons. Look at what the floppy did: small and easy to carry, rewritable, accessible on any computer. Flash memory has had many shapes and sizes; you’re probably using it in your MP3 player, digital camera or PDA. It was the genius of mating it with a USB connector and making a package the size of your baby finger that ready earns it the title of successor. On the market over a year, these “keychain storage” devices ranging from 8 MB to 2 GB are very small and plug into an available USB port. Your system recognizes it without a need for drivers, and you read and write from it as easily as, you guessed it, a floppy diskette. Who doesn’t have a USB port; why they’re as common as…you know.

I recently had a chance to use one from M-Systems (www.diskonkey.com), the current market leader in keychain storage. Called the DiskOnKey, it’s 10 cm long and weighs 22 grams. A snap cover pulls off to reveal the USB plug; two indicator lights flash for connectivity and transfer activity. For a full look go to www.ebabble.net/html/diskonkey.

Moving to number two on the hit parade: the mouse. Most of you are probably thinking I’ve lost it at this point: how can any modern computer operate without a mouse? I readily agree, but wholeheartedly call for the extinction of the “ball” mouse. You know the one; it’s probably on your desk. Standard cream ( or tan, off white, beige, whatever that computer colour is ), two buttons, slightly dirty. Flip it over: a rubber covered ball dead center. Open the cover: inside are three or four small wheels, probably covered in some kind of dust and dirt. No matter how many times you clean it out, a few weeks later your pointer is moving herky-jerky across the screen. It just has to go.

To replace that old mouse you’ll want, nay need, an optical mouse. That crappy ball and wheels have been replaced by an optical sensor that tracks the movements precisely, without a mouse pad. It doesn’t need to be cleaned: it just works. The leaders in this technology are Microsoft (www.microsoft.com/hardware/mouse/tech.asp) and Logitech (www.logitech.com). If you’re really ready for the next revolution pick up a wireless mouse and be free of that nuisance. Take deep breaths and try to relax if I’m moving too fast for you.

Step up to “the now” and replace those dinosaurs with something for this millennia.