Blast from the past: originally published June 18th 2003.

Traditionally I’ve played sports and fighting games on my console systems. The PC handled everything else with aplomb. Since the console market dominates I’m trying to dally in all the genres available. This led me to Microsoft’s Mech Assault. The latest in a long line of Mech Warrior titles, this is a third person shooter where you control a variety of Mechs in a variety of missions. In case you’re not familiar with the whole FASA universe, I’ll boil it down for you. It’s the future, and war is fought between clans in giant robot suits that are loaded with weapons and armor. 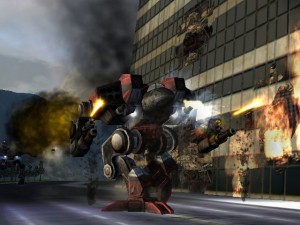 The first mission is a meet and greet, getting you familiar with the controls. Team mates guide you through missions by way of some smooth voice acting. Standard fare cut scenes move the plot along and give you some reasons for blasting away everything.

Which leads us nicely into the reason why people buy games, playability. This is a straight up third person shooter. The camera is slightly behind your Mech, so you see everything that’s happening to it and the world around you. Each Mech is bristling with weapons of various types, plus you can pick up more weapons, ammo and energy on the battlefield when you destroy other Mechs and buildings. Control is straightforward but took me a bit to get the hang of it. The left joystick moves you, the right controls your upper body and where your weapons face. Left trigger cycles weapons, right fires. 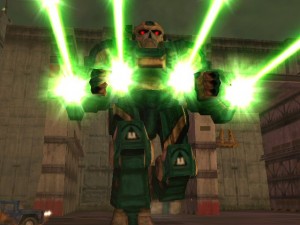 There’s a little of something for everyone in types of play available. The campaign is the main focus, but multiplayer is the new be all and end all via X-Box Live, which of course I don’t have. But I have friends (friend) who came over and we played two player, where the screen is split vertically in the center. You can set time limits, kills limits, free for all, et al. If you have X-Box Live then you can go online and challenge others, plus download new levels and new Mechs. I’m thinking about it, but not sure if I’d get my money’s worth.

If you’re a fan of shooters, Mech Assault has enough content to make it worthwhile. Of course I recommend renting it first, just to be sure your hard earned dollars go towards the right title.