Last week Apple released iOS 4.1, the latest operating system for the iPhone and iPod Touch.  It introduced some exciting new features for users of the iPhone 3GS and 4, but I have the iPhone 3G so I didn’t get those.  Instead I received something wonderful: speed. 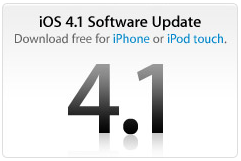 I use my phone mainly for email and at a distant second actual phone calls.  I occasionally check Twitter but that’s about it.  After my upgrade to iOS 4.0 my iPhone 3G became unusably slow; long pauses switching between screens, loading screens, accepting calls.  I received an incoming call and when it finally showed up the call timer showed 18 seconds.  Painful.

With the iOS 4.1 update my phone feels responsive; it’s hard to say how it compares to iOS 3.X since it’s been a while since I upgraded.  Screens transition reasonably fast and there are no noticeable delays.  If you have an iPhone 3G upgrade to iOS 4.1 right away.