Elias The Cursed by Corrado Mastantuono and Sylviane Corgiat.  Here’s the publisher’s blurb: 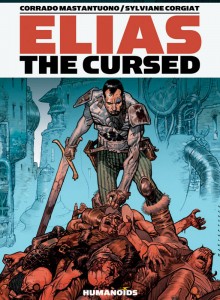 Fallen king Elias is on a quest to reclaim the face that was stolen from him by the mighty sorcerer Melchior. With the help of an unlikely gang, of all fantastical shapes and sizes, and amidst magic both good and evil, Elias The Cursed will attempt to save his face, and perhaps his soul.

I was really on the fence about this book since all I knew about it was the blurb and cover image.  I decided not to order it but then it shipped and I asked my local comic shop to order me a copy; it turned out to be an excellent decision. 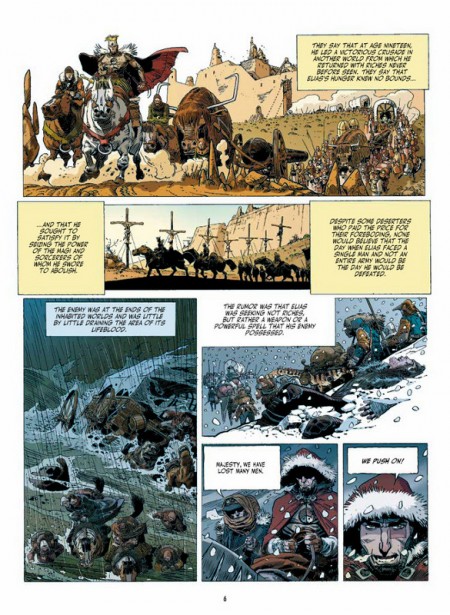 It’s an interesting story: a world conqueror is bent on destroying all magicians through the use of an ancient card game that casts magic spells when the card is recited in its ancient tongue.  He falls to a magician and has his face stolen; from there bent on revenge and getting back what’s his.  Along the way he forms an odd band of characters and action ensues; it’s not a new plot by any means but the manner it’s presented makes it fresh and appealing.  Corgiat gives us characters and dialogue that connect with the reader and propel us and the story along. 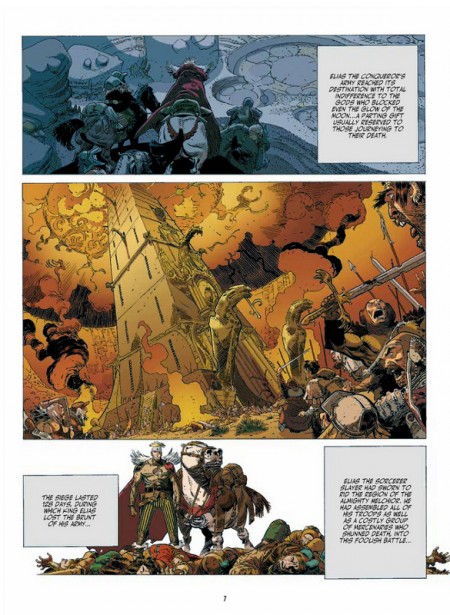 Mastantuono has a style that reminded me of Adam Kubert, in a good way, in the lines of the characters and their expressions.  In fact there are many panels of faces and dialogue that are extremely engaging yet it never feels like we’re losing out on the action.  It’s a fantasy tale so there was lots of opportunity for unique designs and he rose to the challenge and delivered an engaging world filled with dramatic and expressive characters.  Some interesting page layouts with panels on top of full-page illustrations, like he had too much art for the book.  I’m hoping for more Mastanuono works in English; this work ends with a big invitation for a sequel.

Elias The Cursed is a solid graphic novel that tells a great fantasy story full of great characters and great imagery.  At $20 for 168 pages it’s a bargain.  For extras the original series’ three covers are included: two at the back and one as a break in the story.  I don’t know why they didn’t go ahead and great the story into three parts then as it originally appeared.