I’ve been using Harmony universal remotes since they were a Canadian company not yet purchased by Logitech.  I’ve found them to be easy to set up and use: pick your AV equipment through their application, set up your activities and assign the gear to the activity.

My main remote has been the Harmony 880: a nice colour model with eight buttons on the display and a rechargeable battery with charging base.  It was great until the volume up button stopped working, then the pause button.  Trolling online found many, many people with the same issue: the rubber pad under the button that sits between the button and the logic board wears out.  You can open the remote up and try fixing it but I didn’t want to do that until I had a replacement.  I have a Harmony 670 on my upstairs television but didn’t want to move it so I’ve been watching for a decent replacement.  Wandering the aisles of Costco I came across the Logitech Harmony 600 for $49.99 on sale. 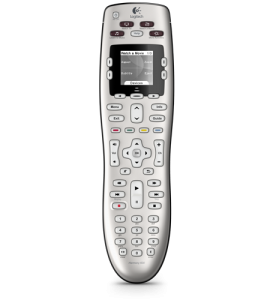 I have to admit that price was the big incentive on this purchase, along with my trust and familiarity with the Harmony brand.  When I got home I checked to compare pricing but this remote appears to have been discontinued already by Logitech, less than a year after release.  It’s readily available in Great Britain so I’m using their product page as reference.

Main features are three defined activity buttons: watch TV, watch a movie, listen to music, plus more activities.  The remote has buttons for most features but the screen allows you to add whatever commands you want, as long as they’re supported by your equipment.  When I connected the Harmony 600 to my PC and loaded the software that was already installed from my previous remote I was asked if I wanted to replace my current remote.  I said yes and everything was migrated over.  I checked my setup and all was well.  When I clicked the devices tab in the software it said I was exceeding the number of supported devices for this model (the 600 is limited to five or so it says) but the eight I had listed all seemed to work.  This appears to be a good way to circumvent the limit if you have another remote handy or can borrow one.

The buttons are the main difference I pick up from my other Harmony remotes: the 670 and 880 have hard buttons and the 600 buttons are rubbery and soft like most remotes.  The buttons are backlit and easy to see in the dark.  I hope the problems of the 880 have been resolved.

The Logitech Harmony universal remotes are the easiest I’ve set up and used.  Pricing has really come down for the simpler and less featured models but for most home uses the Harmony 600 is an inexpensive fit.  For the record my setup is a television, receiver, PVR, DVD, PS3, Wii, X-Box 360, VCR (for my wife) and a HTPC in the works.