I plan to attend TCAF this weekend and see Paul Pope is a guest.  Pope is a creator I see popping up here and there but in the past haven’t been willing to give his material a try; it’s too indie or hip for me.  After some perusing I decided to give Heavy Liquid a try: it’s a Vertigo mini series from 1999-2000 that was collected in 2008.  Here’s the publisher’s blurb: 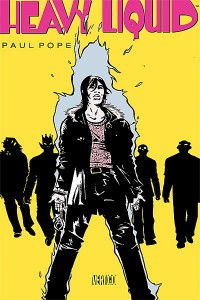 In a future where New York has evolved into a sci-fi metropolis, “S,” a man addicted to “heavy liquid,” a substance that is both a drug and an art form, finds himself trapped in a mystery littered with love and drugs. This new edition features bonus sketch material, new coloring and more.

Yep, that sums it up.  It’s the future and technology has advanced but people are still looking to party and get high.  S and a friend steal a substance called heavy liquid that when cooked can be used as an hallucinogen.  In it’s natural state it’s corrosive and explosive.  Our lead S is on the run from the local mafia he stole heavy liquid from but he has a buyer who wants to use it to create a unique one of a kind sculpture.  Apparently S is also a detective who specializes in finding people as he has to track down the world’s top sculptor who happens to be an old flame.  While this is happening a government agent is also trying to retrieve the heavy liquid and we find out S used to work for the government.  In the end no one really ends up happy.

I can’t say there’s  solid storytelling going on here: things pop up and develop in a film based manner, with moments of solid dialog and plot.  It’s interesting as you’re going along but once finished the odd character choices, dangling plots threads and abrupt ending all make you wonder what went wrong.  Given time Pope will become a leading story teller; it’s just not happening here.

The flip side is the art: very different than the mainstream but easily enjoyed and digested.  The energy easily leaps off the pages and captivates; frantic.  Lots of colour choice give atmosphere to this strange and dark future.

This is a work that needs to be flipped through and examined before purchasing.