FreeNAS seems to be making a lot of news and tech sites lately; it’s a free network attached storage operating system so you can make your own NAS box out of whatever hardware you want.  I haven’t been interested because of how great [intlink id=”184″ type=”post”]Windows Home Server[/intlink] works for me, but I had a friend who needed network storage cheap as in free.

He had a Pentium III 700 MHz PC, Asus CUSI-M SiS motherboard with a 20 GB hard drive and 512 MB of RAM and a CD-ROM.  Since it had to be free I downloaded FreeNAS and installed it, or tried to.  Let’s establish now that it’s best to follow a good tutorial on installing FreeNAS or follow their setup guide; Maximum PC happened to have a decent tutorial recently so I used that as a starting point.

FreeNAS has a ton of excellent services: iTunes server, web server, Windows file sharing, iSCSI, FTP, TFTP, uPNP, dynamic DNS, bittorrent and more.  They would all come in useful in a home or more robust environment but this was a basic one hard drive machine that was going to one thing only: share files.  I did a full installation with data partition and swap file: enabled the swap file, CIFS/SMB, SMART monitoring and one share.  I recommend a good guide or tutorial because FreeNAS is long on acronyms but very short on definitions or help.

Before anyone gets upset about relying on a single share for small business let me say this is a tiny first step into the waters for myself and the business.  They currently back up their local files to a 2.5″ portable hard drive so that process will continue, plus for now I’m copying the shared files over to another PC nightly.

After this initial success I wanted to get a FreeNAS system running for myself, again built with spare parts.  I had an Athlon XP 2600 system on an Nforce2 motherboard, 512 MB RAM, four 80 GB parallel ATA hard drives and a CD-ROM.  FreeNAS offers software RAID 0,1,5 and a few others so I wanted to try software RAID 5 with my four drives.  Unfortunately the system only supports 4 PATA drives in total so  I wouldn’t be able to use the CD-ROM: I would need to boot from USB after using the embedded install option.

I had a spare 1 GB [intlink id=”101″ type=”post”]OCZ Roadster[/intlink] and tried repeatedly to do the installation but it kept failing.  Looking around I saw I could download the embedded image as an IMG file so I did that and using physdiskwrite and physGUI I wrote the file to my USB drive.  That worked and I was able to boot from the USB drive, remove the CD-ROM and have the four 80 GB PATA drives in the system.

I was able to create a software RAID 5 array and everything seemed good until I tried writing to the partition: it would work for a while and then reboot.  I checked to make sure it wasn’t a heat issue but while the drives were warm it wasn’t that.  I then increased the RAM to 1 GB and then 2 GB but the same rebooting occurred.  After lots of tinkering I gave up: it looks like Nforce2 plus PATA drives will not create a working RAID 5 software array in FreeNAS.  Using the system I was able to get a stable RAID 1 software array working with two drives but that was more a test to see if any RAID arrays would work with the Nforce2 chipset.

I have PATA, SATA and SCSI drives and hardware RAID adapters I can use but wanted to start with the cheapest and most bare bones hardware first and work up from there.  I like the idea of FreeNAS and the services it provides but so far it hasn’t won me over.  For what it’s worth Windows Home Server installed on that same system and performed admirably… 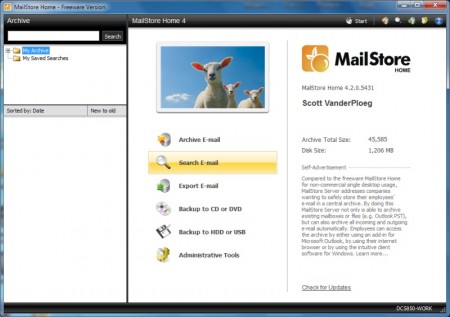