This weekend I upgraded my 250GB hard drive to a 500GB hard drive in my main computer.  I’ve done this countless times with little effort but this experience was anything but pleasant.

I have two partitions on my hard drive: one Windows XP Professional and one Windows Vista Ultimate 64 bit.  I hardly use the XP install anymore since Vista has worked out it’s kinks, or enough so it doesn’t bother me.

I hooked up the new drive and booted Drive Image from it’s two 3.5″ floppies: this program is ancient and works great, but not this time with my Vista 64 bit partition.  A trip to Download Squad provided a list of options: I tried XXClone and Shadow Copy but they were dead ends.  PING and Gparted weren’t able to work for me either.

Since both drives were Seagate models I downloaded Seagate DiscWizard and used that to copy: it’s actually from Acronis and it did copy the contents without any errors but I couldn’t boot either OS so now I was worse off then before I started.

Since I was running Windows Home Server I decided to do a system restore to my new hard drive.  I found the System Restore disk and booted from it (initial boot is agonizingly slow) but it didn’t like my Vista 64 bit partition either: I realized WHS didn’t support it until it’s Power Pack 1 release.  I went to another PC and burned a System Restore Power Pack 1 CD and then rebooted.

It got a little funny here.  WHS wouldn’t restore to a blank disk: it needs to have partitions already there so it provides the option to launch Disk Management which is nice and handy.  I launched Disk Management and my PC crashed to a Blue Screen Of Death with the irq_not_less_than_equal error.  Rebooting and trying again gave the same issue. 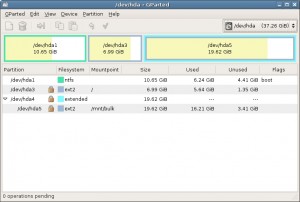 I booted from Gparted and created the two partitions I wanted: one 114 GB and one 356 GB (that pesky 1 GB=how many bytes).  Booting back to System Restore it saw both partitions and restored them.  I was then able to finally have my old system on the new hard drive.  And it only took five hours!

Lessons learned: Vista 64 bit is new and so I need to work with what supports it and not try and rely on old ways and old utilities.  Windows Home Server and it’s system restore worked very well once I worked around it’s problems.  I didn’t plan ahead and could have been caught in a real bind but I had an additional PC to burn CDs with and get what I needed to my ailing system.