Being a fan of Eric Powell I ordered a copy of Chimichanga, not quite knowing what it was. 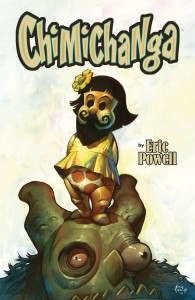 When Wrinkle’s Traveling Circus’s adorable little bearded girl trades a lock of her magic beard hair for a witch’s strange egg, she stumbles upon what could be the saving grace for her ailing freak show–the savoury-named beast Chimichanga!

This is billed as a humour story for children eight and up.  The story is very straightforward with that Powell sensibility: a bearded girl finds a monster and takes it back with her to the circus.  She encounters a witch that later makes a deal with a pharmaceutical company; in the process, she’s kidnapped and eventually is freed by her monster. It’s witty and a light enjoyable read.  The story is well told not only through the snappy dialogue but the rich and entertaining expressions and images of the characters themselves. 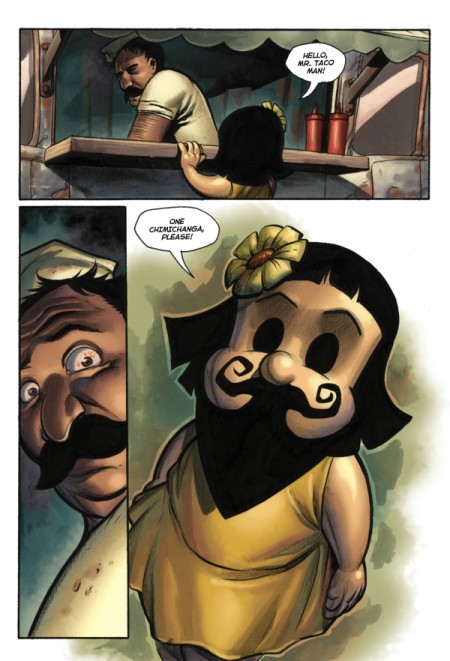 The art is top-notch and is the main vehicle for the story.  Characters are unique and easily identifiable.  How can you not love Powell’s timeless style?  Plus he does a great clown! 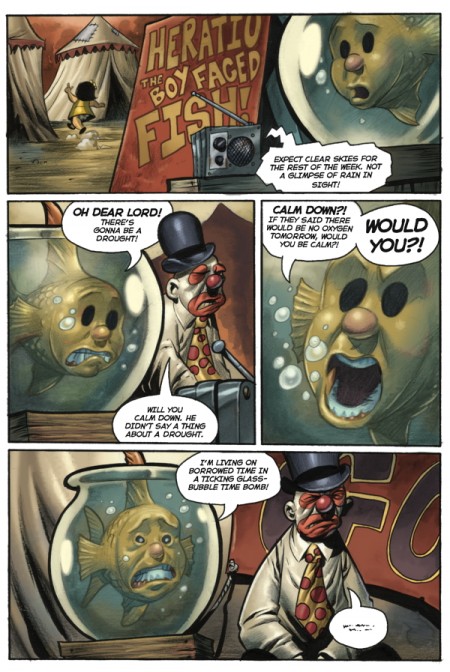 Originally published as a three-issue black and white mini-series by Albatross Exploding Funny Books, Chimichanga was given the full-colour treatment by Dave Stewart.  He did a wonderful job, giving the pages a depression-era feel with toned-down colours. 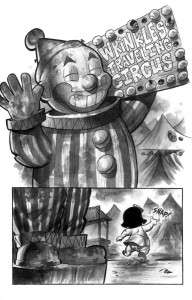 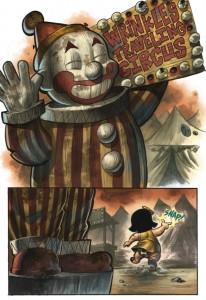 Unfortunately, this book doesn’t hit the mark as a children’s story or an adult tale.  The villain is a pharmaceutical CEO in a suit who employs lawyers to do his bidding, more men in suits.  Casting big business corporate America as the villain of a children’s story would leave them scratching their heads: with everyone else is visually unique and colourful, why do we have a normal-looking guy in a suit?  If that was casting for the adult audience then the rest of the story is too child-focused.

There are a ton of extras, including a new eight-page story and many character development studies with notes from Powell.  It’s in that 6×9″ format that every publisher feels is perfect for children’s or all-ages comics, yet still retailing for $15.  Chimichanga holds appeal for all ages of comic readers but ultimately fails to define itself.