Through a recent Diamond sale I picked up Challengers Of The Unknown Must Die! by Jeff Loeb and Tim Sale.  The trade was published in 2004 and collected the original eight issues mini series from 1991 and was Loeb and Sales first collaboration together.  I’ve always found Challengers Of The Unknown (COTU) to be interesting characters, created before the silver age with a loose concept and purpose.  I picked this trade up based on the strength of the creator’s other works but since this was produced very early in their collective careers it’s best viewed in that light. 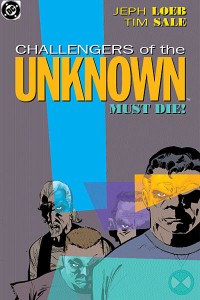 In 1991 COTU was a B list property at best and it seems DC had nothing to lose.  The story follows this same tack: the COTU members past mid life and sit around their headquarters in what would best be described as retirement or self imposed exile.  Their headquarters is blown up, two members are killed and the remaining three members are put on trial for destroying the town that’s built itself up around them.  Each then takes their own path, all quite different, in an attempt to live individually and face their demons.  Ultimately they’re reunited and get to the bottom of what happened to their headquarters and defeat the foes.

It’s a comic story but one that’s told by someone coming from outside the medium: Loeb does a great job taking a look at a superhero group that has slipped into obscurity.  What do old superheroes do after the villains are defeated and they’re not called into service anymore?  A great supporting character is Harold Moffet, a tabloid reporter who built his career around the COTU and their exploits which have dried up.  He’s annoying and gets himself involved in all the character’s new lives, providing a comic foil and a tie between the three individual stories going on.  In fact Harold may be the star of the story.

Loeb tried to get a lot going on in the background, with Marvel references such as Rick Jones and Wong appearances, plus lots of nice references to merchandising and the commercial trappings of popularity.  Everything moved well and I was kept along for the ride until the end when we find it’s a demon trying to gain access to this dimension and their two dead teammates are manipulating events from the beyond.  The story was unconventional and unique until it was tidied with an odd supernatural angle that doesn’t seem to fit the characters or their types of challenges.  As well I found some foul language to be unnecessary and shows Loeb’s TV and movie background.

The art is classic Tim Sale, just classic “early” Tim Sale.  He’s still polishing and perfecting his signature style but it’s all there and it works.  Page and panel layouts are varied and keep things as interesting visually as the story that’s unfolding.

All in all Challengers Of The Unknown Must Die! is a good read and a must for Loeb and Sale fans.