The adaptation of Richard Stark’s Parker: The Hunter by Darwyn Cooke has received a lot of press, both from inside and outside the comics community.  It’s a grim tale of an anti-hero set in the 1950’s about a thief who gets double crossed and sets out to get what’s his. 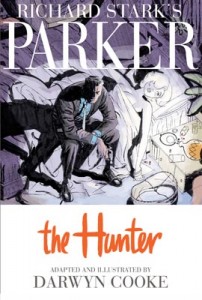 I’m a huge Darwyn Cooke fan and looked forward to this release: I saw him last year talking about it and jumped on the publisher’s preview.  Cooke has a retro 50’s style, simple and to the point, that really fits this time period.

I was about halfway thr0ugh the book when I realized it’s the same story as Payback starring Mel Gibson, except the movie deviated at the end.  It’s a great story of an anti-hero: a bad guy you can’t help rooting for.  Cooke adapted this to a graphic novel in such a way that it seems hard to believe it wasn’t meant to be read this way.  The first part of the story is told with no words, images giving us everything we need.  We don’t even see Parker until we’re more than twenty pages in.  At that point it becomes more of a traditional comic style but then switches to heavy text when we need more information.  It’s seamless and flows beautifully.

The visual style is exceptional, clean and to the point.  This isn’t full colour: one colour is used without and it somehow intensifies the period feel.  The book’s presentation and format was well thought out: standard hardcover dimensions, thick paper, excellent print values.  It’s a complete package, not a quick print, and a must read.