I picked this board up as I had a socket 939 Athlon x2 3800+ processor and needed to use it somewhere.  I checked around for a “cheap and cheerful” motherboard; something around $50, which usually means a Via chipset and limited features.  Picked up the Asus A8V-E SE and was delighted with the feature set of the Via K8T890 chipset; my only complaint was two SATA connectors instead of the standard four. 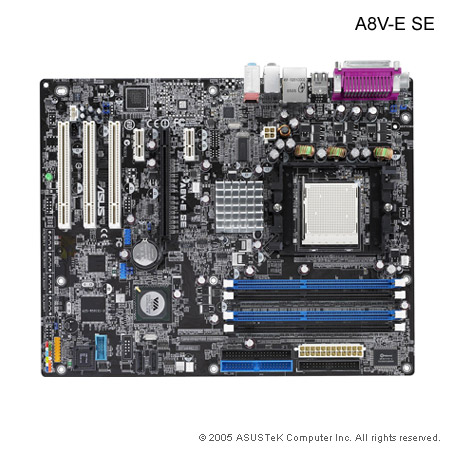 Installation was straight forward, as everything is well positioned on the board and the manual gave all the pertinent details.  For it’s initial home I installed it into an Antec Atlas case, using every onboard function I could and only adding RAM, hard drive, DVD-ROM and PCE-E video.  Performance was good; pretty well matching my Nforce4 motherboard with the same CPU and RAM.  Life was good, except the system saw no usage and I needed the case elsewhere so out everything came and sat around.

The opportunity arose to sell a system so this motherboard went into a new system built inside an Antec SLK3700BQE case: one of my all time favourites and the last I had hanging around the shop.  The build was smooth without a hiccup.  Loaded Windows XP, drivers and updates and still no issues.  I passed the system along to the new buyer.

The system came back: no sound.  Checked the drivers and software setup: Windows XP believed the sound was working as advertised.  I compared the two systems: the Atlas had front audio and the SLK3700BQE didn’t.  Pouring over the manual gave no indication of fault, but that had to be the issue.  I checked for default jumper configuration for the front audio connector but there was no mention.   In the PDF of the manual (since the print copy was with the owner) I zoomed into the front panel audio connector and noticed some pins darker than the others: I took this to represent jumpers, so I put two on as the manual ever so slightly illustrated.  Bang on, audio was working.