Blast from the past: originally published January 9th 2004. 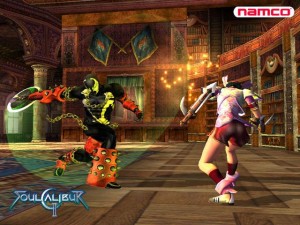 Soul Calibur was the reason I bought a Dreamcast system. An amazing weapons based fighting game with smooth true three dimensional movement and action. It was an amazing title for it’s time, and a follow up has finally been released for all three gaming platforms. My primary choice is the X-Box, for it’s two standout features: Dolby Digital surround sound and HD TV support, in this case 720p. Let’s run through the laundry list of features: thirteen returning characters plus all new, including one unique character per platform, seven play modes ( arcade, versus, time attack, practice, weapon master, survival, team battle ), plus unlocking a ridiculous amount of new characters, weapons, levels, play modes, and more. There is a story for each character, but to be honest the reason to play is to beat up on an opponent in a one on one match, virtual or sitting beside you on the couch. 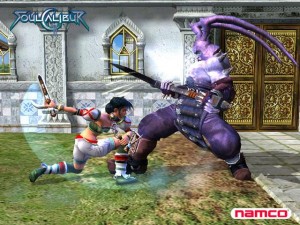 Of course I ripped open the package and started through weapon master mode, which requires the player to perform set tasks for every battle. Examples are beating five characters in a row, or only doing damage to the opponent when they’re in the air. Pretty much the same as Soul Calibur, but enough to keep you coming back for more. Enhanced weapons are nice, but new characters are the best rewards. Weapon master mode allows a player to develop skills for the rest of the game, or for the real challenge: to kick your friend’s butts when they drop by for some game time. 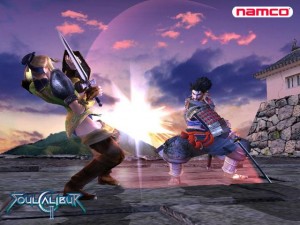 Each character has a unique weapon and a unique fighting style incorporating that weapon. The key to doing maximum damage is to learn how to string together complementary fighting moves to keep your character in motion and dealing damage. Button mashing will work for a while, but a learned opponent will look for their opening and squash you.

Soul Calibur II is the best weapon’s based fighting game ever, bar none. Check it out at www.soulcalibur2.com or rent a copy to see for yourself.