In my bacon recipe post I mentioned using a pork loin instead of a belly and sort of left it at that so I’m revisiting the topic.  I really enjoy smoked pork loin which also goes by the name back bacon or Canadian bacon: it’s a cured and smoked pork loin.  It’s solid, slightly dry and tastes like the meaty part of traditional bacon.  After traditional pork belly smoked bacon it was the next recipe I tried in Charcuterie.  The recipe called for a spiced brine and then smoke with gave a taste exactly like ham, which is far off the mark from what I wanted.  Using the pork belly bacon method produced the results I wanted. 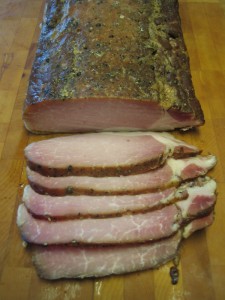 A wonderful alternative is English bacon, which is the loin with part of the belly attached.  This is not a cut you find easily but if you know your butcher you’ll get it.  It’s the best of both worlds: wonderful cured loin and fatty belly.  Yes I could have trimmed that fat on the side but it frys up crispy and adds fat to the pan for even more flavour.