After a long wait, at least it seemed to me, we have Jim Henson’s Tale Of Sand.

Join us as we explore this missing piece of Jim Henson’s career in a celebration of his creative process. Discovered in the Archives of The Jim Henson Company, Tale of Sand is an original graphic novel adaptation of an unproduced, feature-length screenplay written by Jim Henson and his frequent writing partner, Jerry Juhl. Tale of Sand follows scruffy everyman Mac, who wakes up in an unfamiliar town, and is chased across the desert of the American Southwest by all manners of man and beast of unimaginable proportions. Produced with the complete blessing of Henson CEO Lisa Henson, Tale of Sand will allow Henson fans to recognize some of the inspirations and set pieces that appeared in later Henson Company productions.

What we have is a trippy tale through someone’s subconscious. We meet Mac who is told to get from point a to point b, through a desert on foot. Along the way, he’s constantly hunted by a bearded man with an eye patch. Mac encounters endless fantasy scenarios in his trip, such as battling a lion, having a 1920s French nightclub pop out of the ground through an outhouse, and a World War II German army attack to name a few. It’s very much “out there”; someone’s dream or nightmare comes to life. While the story takes place in a desert the title strikes me as the readers grasp on what’s happening, and a fistful of sand isn’t something that can be held.

There’s very little dialogue, just enough to give the reader some point of reference. Then midway Mac encounters Melrose Mernly who never stops talking: it’s a dramatic change that amplifies how little we’ve read until that point. This is a non-stop action tale with no purpose other than to showcase its frenetic movement. In the end, if there’s more I don’t get it. Perhaps since Mac tries desperately to light a cigarette the entire book it’s an anti-smoking message. Or an allegory for life and its cycle of completion and creation.

The star here is the art and Ramon Perez who took a screenplay and visualized, or as the cover says realized it for us. It’s stunning in its execution of design, layout and pace. Panel by panel Perez moves from full colour to single colour and back again. Interspersed as backgrounds are pages of the screenplay, a visual reminder or clue of what we’re doing here. That lack of dialogue allows Perez to tell so many parts of the story completely in visuals with resounding success.

Jim Henson’s Tale Of Sand is an interesting graphic novel. Based on a screenplay that never saw action, I can see why it languished until now. It’s perfect as a visual vehicle for Ramon Perez. Extras include a foreword by Karen Falk, an afterword by Lisa Henson, biographies of the three creators and character designs by Perez. This is a well-designed book: heavy paper stock, sewn binding, an elastic bookmark on the back cover. At $30 it’s a good deal with the potential for multiple reads. 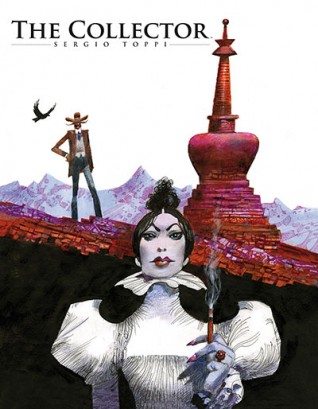