It’s been heavily promoted by Legendary Pictures, as only a movie studio can do.  Preview pages, an animated short, press releases and coverage everywhere.  For its first foray into comics, Legendary has published Frank Miller’s Holy Terror, his response to 9/11.  I’m a huge Frank Miller fan, having read everything he’s ever done.  But this book is crap: don’t buy it.  I want my money back.  End review.

Still here?  Let’s get into the nitty-gritty.  I’d give you the publisher’s information but there isn’t any.  The website gives almost nothing: the already released promotional material and a release date of September 28th and suggesting we pre-order a copy.  Oh wait, that’s come and gone.  Here’s pertinent information from Amazon.

There’s a deadly menace somewhere in Empire City, and The Fixer only has until dawn to save his town – and civilization as we know it! Legendary Comics presents an all-out, head-busting, bone-breaking, neck-snapping brawl of a tale from Frank Miller, one of the most celebrated storytellers of the medium. Years in the making, HOLY TERROR features the desperate and brutal quest of a hero as he is forced to run down an army of murderous zealots in order to stop a crime against humanity.

For the story, we have a costumed vigilante, The Fixer, who eliminates an Al-Qaeda cell in Empire City after experiencing multiple bombings.  It’s basic, simple and to the point, as most superhero stories are.  Except here we don’t have superheroes, we have masked vigilantes who enjoy torturing and killing.  They face Arab zealots who perform suicide bombings, shoot down helicopters and fit the classic “Arab terrorist” stereotype.

Events are told by our narrator Natalie Stack, a cat burglar who is also the love interest of The Fixer.  For some inexplicable reason this tale of death and terror has a thread of lust/love running through it, for no good reason.  They beat each other up and then make out before the first attack, then The Fixer keeps talking about falling in love with Stack.  It has no relevance to the plot, none.

Art is an odd mix.  We have Miller’s continual slide to scratchy lines and odd forms which played heavily in Batman: The Dark Knight Strikes Again, but without any consistency.  The Fixer appears in the first half of the book as a thick musclebound opposing male and then becomes a slim almost effeminate character.  Spot colour is used randomly and without purpose: Stack’s shoes sometimes show up with orange soles, her eyes sometimes green.  Miller originally created this book a decade ago featuring Batman and Catwoman but DC wasn’t interested so the characters have been altered: it seems done in haste and rather crudely.

Frank Miller’s Holy Terror is a wide book like, 300.  Unfortunately, the paper is very thin, the image on the other side bleeding through: it heavily detracts from the reading experience.  They cheaped out and it shows.  No extras are included.  I can only imagine it’s priced at $30 because Legendary think Miller’s name can command that premium.  Before this book it may have, but not anymore. 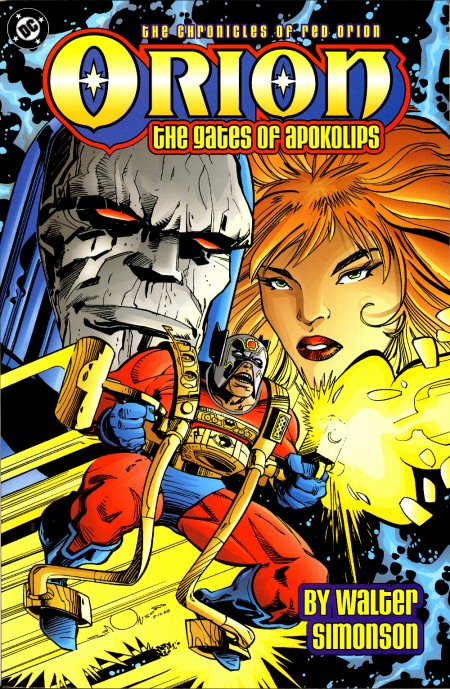 Orion: The Gates Of Apokolips