Delving further into Charcuterie I had been thinking about confit: slow cooking meat in a fat at low temperature.  Traditionally it’s done with duck legs in duck fat but I had neither so I used what I had: a big container of bacon fat and chicken legs.

For years I’ve been saving my leftover bacon fat (grease if you will) for no apparent reason other than it might come in handy.   Well, when I was younger I used it for my Krafter Dinner instead of butter but that was about it.  For the last decade or so I’ve been pouring it into a large cup and when it filled I’d scoop it out into the garbage and start again.  I finally had a purpose for that fat!

We were eating chicken breasts for dinner and I had a bunch of whole chickens in the freezer from the last sale so I broke it down and seasoned the dark quarters (leg and thigh) with salt, bay leaf, garlic and clove in a medium freezer bag and promptly forgot it in the fridge for three days.  I have a lingering habit of forgetting about meat until it’s at the brink of expiration: luckily this chicken was still good.

I heated the bacon fat in the microwave until it was liquid and poured it through cheesecloth to pick up everything but the clear fat.  Found a decent covered oven dish and put the chicken in that and then covered them with the bacon fat: unfortunately I didn’t have quite enough to completely cover the chicken so I topped it up with olive oil.  Slipped it into a 185 degree oven for ten quick hours and it was done, or at least was fork tender. 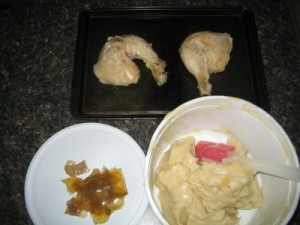 I transferred chicken and fat to a container and squirreled it away in the fridge for a week.  Cracking it open and locating the chicken I pulled them out and scraped as much of the fat off as I could and put them in the oven for twenty minutes until they were warmed through.  The skin was soft so I them put them skin side down in a medium high pan and they crisped quickly. 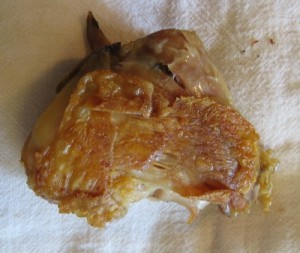 The chicken was wonderfully tender and had a great mouth feel.  It tasted different from roast chicken: there was a slight smoky flavour from the bacon fat and tasted very rich.  The crisped skin fused to the meat and really added to the overall texture.

The fat was put into a container and regained it’s spot in the fridge for my next confit adventure.  I was able to get a duck and eight kilos of duck fat so more confit will be happening in the future.  It may seem like a lot of work but done in larger batches you can easily get several meals. 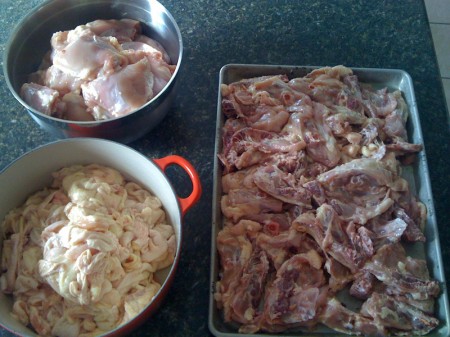 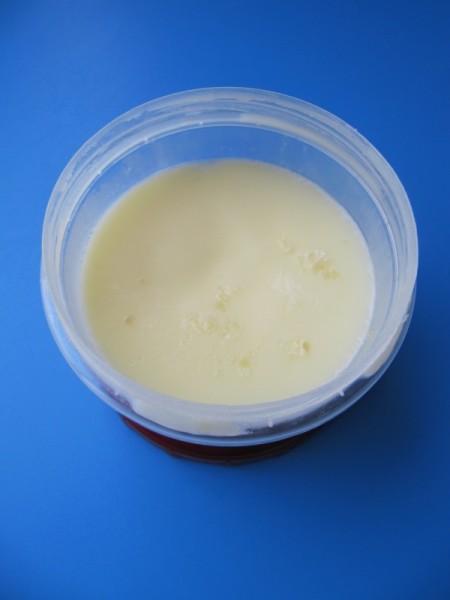