My daughter loves Yop, the yoghourt drink.  It’s pretty pricey for the minuscule bottle, so I checked the ingredients and found skim milk, sugar, vanilla, active bacteria and some other stuff.  Since this sounded like skim milk yoghourt with sugar and vanilla I decided to make my own by mixing these ingredients with enough milk to make it look like a thin milkshake. 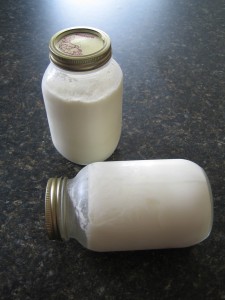 She didn’t seem to mind the change up but I was still a little price sensitive and thought to make my own yoghourt and then I’m really just using my own raw ingredients.  I described the plan to my wife and she took it the same way she does all my raw ingredient experiments: not saying much and I believe not expecting much.

Searching the web for recipes and techniques proved to be enlightening: yoghourt (or yogurt or yoghurt) is dead easy.  You need any kind of milk, a large pot, thermometer, a small amount of yoghourt and sterilized containers.

I had a box of mason jars in the garage so I measured them up (1 gallon each) and boiled two in my large pot for ten minutes then left them to dry.  I then poured two gallons of 3.25% fat milk (a little under two litres) into the pot and set it on medium high heat, checking for 195 degrees F.  When it reached that I took it off the heat and watched until it dropped to 115 degrees F and then poured it into the two mason jars.  Next I added a big tablespoon of yoghourt to each jar, stirred it up and sealed the jars.

From here the milk and yoghourt mixture needs to ferment so there were a few suggestions: put the jars in the oven with the light on or wrap in towels and put in a cooler.  Either method recommended 8-12 hours of fermentation so I went with the oven since it seemed easier and we weren’t using it.

The next morning I took the jars out and had a nice consistency of home made yoghourt: not too thick or thin.  For eating and sauces I would like a firmer yoghourt so I could add whole milk powder before the yoghourt or just strain out the yoghourt.  For my daughter’s drinking pleasure I still need to add milk but it just feels great knowing I made that, all by myself (and twenty or so websites I read first).