Blast from the past: originally published long ago. 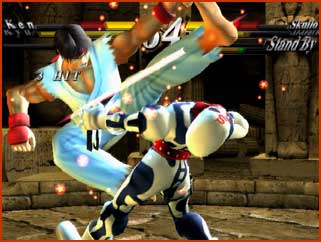 My only Playstation 2 game is Street Fighter EX3; Capcom was kind enough to send it in a timely manner to coincide with my PS2 purchase. I’m waiting on other titles, so stay tuned.

This is the latest in a long line of Street Fighter games, which is a two edged sword. On the plus you can start it up, choose Ryu or any of the classic characters, and pull of the special moves. On the downside there isn’t much that can be added when the tried and true is stuck to.

A raft of characters are available; all the classics plus an assortment of new faces. Finish the game with eight different characters and a new character is uncovered each time. That’s right, I finished the game eight times just to see the hidden characters. The sacrifices I make! Lots of variety to go around make replayability high. 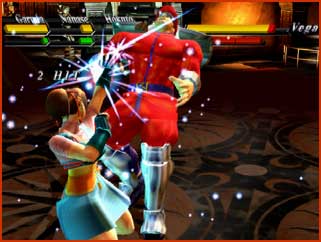 Four modes of play are available; original, area, character edit and training. The first two are real modes; the last two help build and learn the characters. The innovation provided in EX3 is the ability to have up to three other players on your team to fight a battle, subbing in on your command or when a player dies. Or fight in Arena mode and have four players per side in the ring at the same time. Character edit mode lets you create your own character by allotting credits to different abilities to mix and match a fighting style. Everyone starts with the same credits but the possibilities are truly endless. Training is just as it sounds; train yourself by learning your character’s moves and combos.

The graphics are top notch on this title, or as good as you can get with a Street Fighter EX title. No blockiness to the characters, excellent backgrounds and smooth animation make this title visually striking.

My complaints? The EX line gave the characters three dimensions, but they still can only play left to right, as opposed to other fighting games, pretty well all the others, where you can move freely in all directions. The game almost forces you to pick tag team members, even though you may want to fight alone.

Extra touches? After you win the game, as the credits roll, you can fight characters made by the development team and rack up “K.O.’s”.

If you’re a fan of the Street Fighter series, pick this one up. Otherwise rent it and judge for yourself.