Another find at the bargain table was False Impression by Jeffrey Archer.  I had read Kane & Abel years ago but hadn’t read any of his other works since: I don’t like to take on new authors blindly and thought since I enjoyed the one book years ago I would give the others a try.  Here’s the official blurb:

The tale unfolds in New York, where Anna Petrescu is missing, presumed dead, after 9/11. She uses her new status to escape from America, only to be pursued across the world from Toronto to London, to Hong Kong, Tokyo and Bucharest as she tries to find answers to the following questions:

Why was an aristocratic old lady brutally murdered in her English country home the night before 9/11?

Why was a successful New York banker not surprised to receive a woman’s left ear in the morning post?

Why did a top Manhattan lawyer only work for one client, but never charge a fee?

Why was an Olympic gymnast paid a million dollars an assignment, when she didn’t have a bank account?

Why was an Honours graduate working as a temporary secretary after inheriting a fortune?

Why was an English Countess ready to kill the banker, the lawyer, and the gymnast, even if it meant spending the rest of her life in jail?

Why was a senior FBI agent trying to work out what the connection was between these eight apparently innocent individuals?

It will take all the resources of the FBI and Interpol to work out the connection between this seemingly disparate cast of characters. The one thing they all have in common is Van Gogh’s Self-Portrait with a Bandaged Ear. Full of twists and turns and heart-stopping intrigue, False Impression is guaranteed to pull you into its cleverly constructed web and not let you go until the final page. 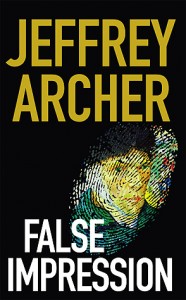 Basically an art professional is drawn into a web of theft, finance and murder.  She learns as she goes and

It’s an interesting tale and a mixture of mystery, drama and action.  Pace and storyline were well executed: I found myself having issue putting it down.  Characters and environments were well defined, or enough to keep things moving along.