I’ve been downloading and watching television shows that aren’t available in Canada.  I don’t have a media center PC but do have a Sony PS3 hooked up to my television.  Most of these downloads are MKV files and aren’t natively supported so I needed a way to convert them.

At first I ran PS3 Media Server but it was buggy and I had my share of issues running it on my Windows Home Server: no sound or no picture, odd stuttering, overall pain.  The beauty of this program is that it converts any files on the fly for native playback.  When it worked it was glorious as it’s menu and navigation are much simpler than the PS3’s menu system. 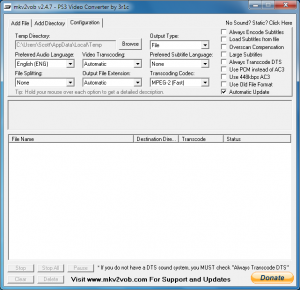 A bit of internet searching led me to MKV2VOB PS3 Media Converter.  It does what it says: converts MKV files for playback on a PS3.  Three tabs: add file for single file conversion, add directory for multiple file conversion, configuration (screenshot above) for settings.  I pointed MKV2VOB at my television download directory and let it go: conversion is quick since it’s not actually re-encoding video but converting the structure to a MPG file.  I didn’t need to adjust any settings at all.

Once conversion was complete I started up my PS3, navigated to my new files and watched them without issue.  This is a one trick pony that gets the job done simply and efficiently.